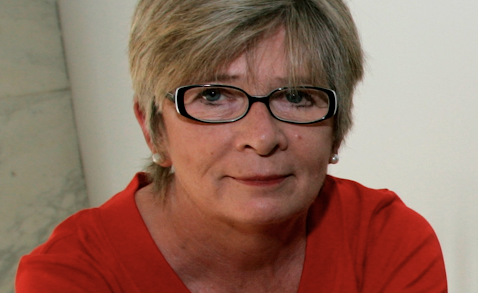 Barbara Ehrenreich, who is pictured above, died on September 1, 2022. In its November-December 2022 edition, Mother Jones published a tribute to Ehrenreich, written by her friend, Deirdre English, a former editor of the magazine.
The Mother Jones' tribute to Ehrenreich, as it appeared in the hard copy version of the magazine, is only one page in length. A slightly different, slightly longer, version can be accessed online by clicking right here (paywalls permitting, of course). Though I commend the entire article to you, I think the final paragraph in the print version is worth highlighting:

Barbara's lessons are clear: Always think. Don’t retreat into depression, individualism, or overly indulgent “self-care” — create community, act collectively. Mother Jones once said, “Pray for the dead and fight like hell for the living.” Ben Ehrenreich, Barbara's son, wrote that his mother “…was never much for thoughts and prayers, but you can honor her memory by loving one another and fighting like hell.”

I like that "loving one another and fighting like hell" suggestion that came from Barbara's son. But let's not overlook the more specific instructions coming from Barbara Ehrenreich herself: "Think. Create community. Act collectively."
Ehrenreich thought profoundly about human society, economics, politics, and she authored many books. Click right here for a list.
Her final piece of advice, though - at least as I see it - is that we fulfill ourselves not by "thinking," but by "acting," and that is something we need to do together!
To Subscribe Just Click This Link
Image Credit:
https://www.motherjones.com/media/2022/09/the-long-fight-of-barbara-ehrenreich/