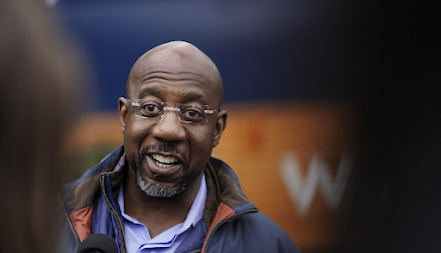 Senator Raphael Warnock, pictured above, has just won reelection to the United States Senate, representing the state of Georgia. Many people, all over the United States, gave a huge sigh of relief. Me, too!
What many knew best about the recent election in Georgia was how unsuitable Senator Warnock's opponent was. Let's not even identify him by name, or stress his unsuitability as the reason for the electoral result. Let's give full credit to Senator Warnock.
In The New York Times, yesterday, the newspaper ran a story about Senator Warnock's election, which was titled as follows in the hard copy edition of the newspaper: "Warnock's Rise Fueled by Pain, Faith and Flair." As you can tell from the title of today's blog posting, I liked that "faith and flair" emphasis.
According to The Times, Senator Warnock, who has served as senior pastor of Atlanta's Ebenezer Baptist Church, where Martin Luther King, Jr. was once co-pastor, said two things I would like to highlight.
First, Senator Warnock likened voting to a "prayer for the world we desire."
Second, Senator Warnock "called democracy 'the political enactment of a spiritual idea,' that everyone has a divine spark."
Our democracy began with the Declaration of Independence, and the Declaration of Independence begins like this:

We hold these truths to be self-evident, that all men are created equal, that they are endowed by their Creator with certain unalienable Rights, that among these are Life, Liberty and the pursuit of Happiness.--That to secure these rights, Governments are instituted ..., deriving their just powers from the consent of the governed.

Let us not lose sight of that "divine spark," there at the very beginning, that is the origin of the democracy that has sustained all our efforts to achieve what the Declaration says is the unalienable right of every person to life, liberty, and the pursuit of happiness.
Voting, I think, is more than a "prayer." It is more than an expression of hope. It is, in fact, a concrete action that insists upon - that demands - that "We, the people," individually and collectively, shall govern ourselves, and shall use our powers of self-government to "form a more perfect Union, establish Justice, insure domestic Tranquility, provide for the common defence, promote the general Welfare, and secure the Blessings of Liberty to ourselves and our Posterity."
Thank you. Senator Warnock, for reminding us of what is at stake in each and every election. Thank you for helping to keep that democratic spark alive!
To Subscribe Just Click This Link
Image Credit:
https://www.wtxl.com/news/national-news/warnock-win-makes-it-official-georgia-is-a-24-battleground