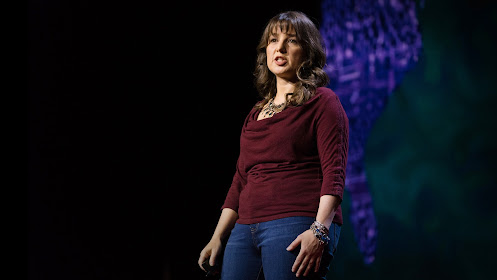 Zeynep Tufekci, pictured above, is one of my favorites. I have written about her frequently in this blog, and I relay her thoughts about technology and politics to the Legal Studies students I teach in a course called "Privacy, Technology, And Freedom."
On Sunday, July 24, 2022, The New York Times' "Sunday Opinion" section collated various reflections from its columnists on the topic, "I Was Wrong." Tufekci's column was titled, "I Was Wrong About the Power of Protest."
While the submissions from other columnists featured admissions about how a past column was wrong, Tufekci commented on why one of her past ideas turned out to be wrong. What idea? The idea that huge public protests would lead to significant political change. She highlighted, specifically, the global day of protest held on February 15, 2003, the "largest protest event in human history," intended to head off the United States' war in Iraq. As I presume we all remember, that protest didn't have the slightest impact on what President Bush did in the name of all Americans.
Her recent column was not some sort of "new insight." Tufekci, actually, has been making this point for a long time. She even wrote a book about it, Twitter And Tear Gas, pointing out that the large numbers of protesters using social media to voice their dissent does not translate into any effective social or political change. In my class, I feature the YouTube video, below, a TED Talk that points out that "organizing" by way of social media is not a route to an effective way to make political change. Better to use the Civil Rights Movement model, Tufekci tells us.
I think she's right.
Here is what works: real engagement, in real physical spaces, with real (other) people. Analog action, not online posturing; that is what actually works! In case you have missed this before, here's where Tufekci lays it all out: