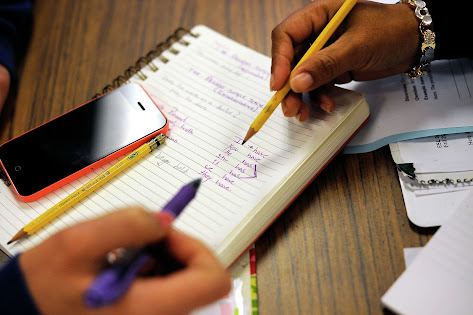 Ellen Jovin wrote an engaging column in yesterday's edition of the San Francisco Chronicle. Apparently, Jovin is the "proprietor of a traveling pop-up grammar advice stand called the Grammar Table." She calls herself a "roving grammarian."
Jovin sits on the street of cities all over the country and answers questions from passersby. She reports that she has "done that in 49 states," and she says that "there is no topic I am approached about more than this one: "Oxford comma, yes or no?"
For those not familiar with the debate, you can click right here for a discussion of the Oxford comma. Jovin, of course, in her Chronicle column, outlines the debate as well.
I am a strong proponent of the Oxford comma. Others, as Jovin notes, feel strongly just the other way.
In summing up the discussion, Jovin told a story that resonates beyond the Oxford comma debate. Particularly after having written yesterday's blog posting, in which the claim was made that even "political enemies" deserve a "piece of pie," I thought I would be remiss if I didn't pass this along:

One thing I have learned is that when people bother to ask me about the Oxford comma, they usually want to keep it close. A man I met on a hot day in downtown Salt Lake City was an exception. I was sitting at the Grammar Table when he approached and told me that Oxford commas had been a source of friction between him and a friend.

“My friend didn’t want them,” he said.

“Yes, people can get very upset about the Oxford comma,” I replied. “Do you use them?”

“Well, my friend and I were having a knock-down, drag-out fight about this, so I did some research,” he said. “And I was right: either way is fine. She was not open to the idea that both were acceptable. That fight has served me well, though, because every time I argue with her, every time we come to an impasse, I say to her, ‘Remember the comma!’ ”

“I approve of your open-mindedness about the Oxford comma,” I told him.

I meant it, too. Perhaps this man could be a model of moderation for us all. Fighting over chores? A fence? Politics? Remember the comma!

Politics requires a debate between those with different (and often strongly held) opinions. "Either way" is often fine. Different, though; that's for sure. In a society that practices democratic self-government, we can, collectively, decide what we should do. Sometimes the choices before us are momentous. But we do have different opinions. The "democratic self-government" concept is that we debate our different opinions, and then collectively make a choice. If the result isn't to our liking, we can have that debate again, and maybe decide things differently, next time around.
As we do engage in the debate, the idea that we should "remember the comma" is pretty good advice. Remembering that everyone should, probably, end up with some "slice of pie" is the same kind of admonition.
We are, after all, "in this together," and "together" we must rise or fall, prosper or fail.
So, if you care which way the debate will work out (and the consequences are definitely significant) then don't forget that your own participation will probably have an impact on which way that debate is determined. If we want "self-government," in other words, we will have to get involved ourselves.
But when we do, let's "remember the comma."
To Subscribe Just Click This Link
Image Credit:
https://www.sfchronicle.com/opinion/openforum/article/grammar-oxford-comma-17517230.php