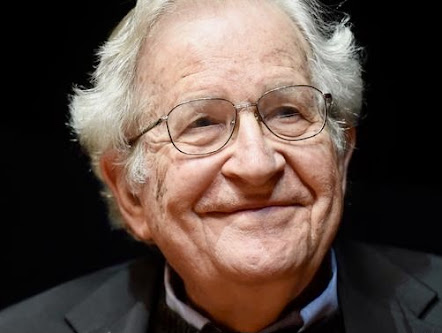 That is Noam Chomsky, above, smiling under my headline: "All Kinds Of Horrors." In fact, this distressing phrase is Chomsky's own, as he has reflected on American history:

All kinds of horrors have existed. Over time, their power has been eroded but never completely eliminated. Slavery was abolished, but its remnants remain in new and vicious forms. It’s not slavery, but it’s horrifying enough. The idea that women are not persons has not only been formally overcome, but to a substantial extent in practice, too. Still, there’s plenty to do. The constitutional system was a step forward in the eighteenth century. Even the phrase “We the people” terrified the autocratic rulers of Europe, deeply concerned that the evils of democracy (what was then called republicanism) could spread and undermine civilized life. Well, it did spread — and civilized life continued, even improved.
So, yes, there are periods of regression and of progress, but the class war never ends, the masters never relent. They’re always looking for every opportunity and, if they’re the only participants in class struggle, we will indeed have regression. But they don’t have to be, any more than in the past.

Chomsky is now ninety-three years old (the picture shows him at ninety), and the remarks reproduced above come in a conversation with David Barsamian. Considering the quotation I have just provided, it is appropriate to show Chomsky with a cheerful expression. Despite all the problems, despite all the "horrors," Chomsky lets us know that better things can prevail.
He tells us, in fact, that better things have prevailed! Despite all kinds of horrors, past and present, defeatism and despair are not our proper response.
You can click right here for the article from which I took the Chomsky quote. The headline on that article is, "Optimism of the Will." The article came to me thanks to Tom Dispatch, a political newsletter to which readers of this blog might like to subscribe.
That "Optimism of the Will" phrase was first articulated by Antonio Gramsci, a Marxist, and a one-time leader of the Communist Party in Italy. Gramsci's complete thought is captured by the following:
Pessimism of the Intellect, Optimism of the Will
I have always loved this statement. It references (without ever directly saying so) the important distinction between "observation" and "action." It is critically important, of course, that we know what is actually happening. We need to look around us, and "observe," and to think about what we see. Our "intellect" is the power we bring into play when we seek to understand the world through observation. When we do, how pessimistic we can become!
But we are not only "observers." We can act. We are "actors," too! No matter how dire the horrors that our intellect observes, we must never forget that everything we see, in the human world that we create, can be changed by what we do.
Let us not, then, be daunted. Let us remember, always, that we have recourse to that "optimism of the will" that informs us what is possible.
My father made sure I learned that lesson. And this was his favorite poem:
Invictus
By William Ernest Henley
Out of the night that covers me,
Black as the pit from pole to pole,
I thank whatever gods may be
For my unconquerable soul.

In the fell clutch of circumstance
I have not winced nor cried aloud.
Under the bludgeonings of chance
My head is bloody, but unbowed.

Beyond this place of wrath and tears
Looms but the Horror of the shade,
And yet the menace of the years
Finds and shall find me unafraid.

It matters not how strait the gate,
How charged with punishments the scroll,
I am the master of my fate,
I am the captain of my soul.
To Subscribe Just Click This Link
Image Credit:
https://www.dw.com/en/dissident-intellectual-noam-chomsky-at-90/a-46629642