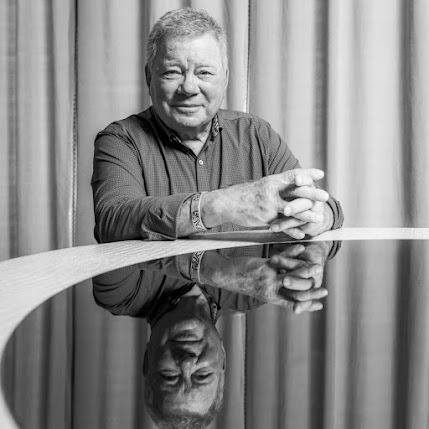 William Shatner, pictured above, is a real person, and is another one of those "Star Trek Guys." In an earlier blog posting, I linked to information about a fictitious personage, Jean Luc-Picard, the "Star Trek Guy" who was fond of providing his orders by way of the following command: "Make It So."
Given my Two Worlds Hypothesis, I identify with Picard's directive as stating exactly how we can, and should, conduct ourselves in the human world that we create. The scientific rules - the rules of physics that govern how spaceships operate in interstellar space - are "descriptions" of what must and will happen, given specified conditions. Not so the rules in the world in which we most immediately live - "our" world. The rules that govern "our" world are not "descriptions," outlining what must and will happen, but are "prescriptions," instead, statements by which we tell ourselves what we want to do and/or what we think we ought to do.
"Make It So," in other words, is a commandment fully applicable to the rules that govern conduct in the human world. In that world, "possibility" is the reigning category, and if we want to make new arrangements, what Picard says is exactly how we should approach our situation. Whatever arrangements we wish to establish, it is up to us to "Make It So."
oooOOOooo
Shatner, who is ninety-one years old, was briefly profiled in an article published in The Wall Street Journal on Saturday/Sunday, September 17-18, 2022, which is where I got the picture. The article was captioned as follows: "At 91, an actor feels the urgency and awe of growing old." Last year, Shatner took a brief trip into space, and that let him see the World of Nature, entire - for the World of Nature is fully encompassed in Planet Earth, a world that we most definitely did not create. Here was Shatner's reaction to seeing Earth from space:

Mr. Shatner’s journey to space last October left him changed. As he looked down on “our tiny planet,” he says he felt a profound sense of grief over the destruction of this “warm nurturing” orb and the extinction of species that took billions of years to evolve. In April he performed a spoken-word concert about the experience, with songs co-written by Robert Sharenow, at the Kennedy Center in Washington, D.C., which he says will soon be available as an album and music video. “My fervent wish is that it starts a movement of awareness of where we are and what we have to do,” he says. “That may be my destiny.”

Read the article yourself (paywall permitting) to hear from Shatner in a "Memento Mori" moment:

I am feeling much the same, myself. I am ever more in awe of the World of Nature, that lovely blue planet I have never seen from space, but which I can always see in my mind.
I am ever more mindful, too, of our need to change what we are doing. I am ever more hopeful that we can understand just how profoundly we need to change our way of thinking, and create ourselves another set of rules.
Bob Dylan has a song about that - and I'm with Picard. We need to "Make It So!"