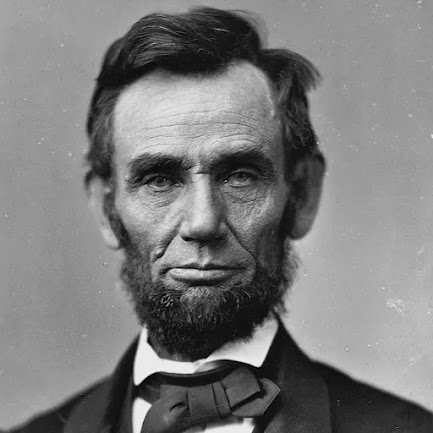 The day after our recent set of midterm elections, The Wall Street Journal published a commentary by Allen G. Guelzo, "Lincoln's Vision of Democracy." Because I think Guelzo's commentary provides an excellent insight into what Abraham Lincoln has to tell us about politics, and democracy, I am reproducing the entire article, below.
Guelzo's article, in essence, is a meditation on the The Gettysburg Address. He particularly emphasizes how important it is that we take Lincoln's famous phrase to heart:

That we here highly resolve that these dead shall not have died in vain -- that this nation, under God, shall have a new birth of freedom -- and that government of the people, by the people, for the people, shall not perish from the earth.

Those who have read my blog postings with any consistency will recall that I have cited to this phrase often, and have particularly emphasized that our government, if we are to maintain a democratic government, must be a government that is "by" the people.
There is no substitute for our direct and personal involvement in politics and government, and when we cease to make a personal commitment to the government - when our government is no more "by" the people - we will discover that the government is not "of" us, or "for" us, either. I do commend the article below, as a way for those who are reading this blog posting to refresh their understanding of how critically important it is for us to engage, ourselves, in the "political world" that is our own, human creation.
Before sending you off to read Guelzo's article, however, let me quote something else Lincoln said, cited in what Guelzo has written. It's an appropriate reminder after what has happened on Tuesday:

“I do not deny the possibility that the people may err in an election,” [Lincoln] conceded in 1861. “But if they do, the true cure is in the next election.”

Lincoln’s Vision of Democracy
At Gettysburg, he chose his words carefully—especially the prepositions, ‘of,’ ‘by’ and ‘for’ the people.
By Allen C. Guelzo
The news of the great battle at Gettysburg came to Abraham Lincoln by fits and starts. But when it was finally confirmed on the morning of July 4, 1863, that Robert E. Lee’s Confederate army had been forced to retreat, the tidings couldn’t have been more welcome. To a crowd of well-wishers who gathered outside the White House, Lincoln exulted that “the cohorts of those who opposed the declaration that all men are created equal” had at that great battle “ ‘turned tail’ and run.”
Before month’s end, plans were developing to create a majestic national cemetery in Gettysburg for the more than 3,300 Union dead, with dedication ceremonies to take place on Nov. 19. The featured orator would be the august Edward Everett. But for the actual dedication sentences—a “few, appropriate remarks,” as David Wills described them in his invitation letter—the organizers turned to Lincoln.
What they expected was probably perfunctory. But Lincoln gave them something far beyond their expectations. In 272 terse and simple words, the president laid out the story of the American republic in three stages: past (“four score and seven years ago”), present (“now we are engaged in a great civil war, testing whether this nation, or any nation so conceived and so dedicated, can endure”) and future (“we here highly resolve that these dead shall not have died in vain”).
The brevity of Lincoln’s remarks also left the Gettysburg Address dark with hidden lights. Why the oddly biblical opening? Why the invocation of 1776 and the Declaration of Independence rather than 1787 and the Constitution? What would have happened if, in the ensuing two years of the Civil War, we had failed the “testing”?
The least well-examined words of the address, however, are its expansive triplet: “government of the people, by the people, for the people.” This wasn’t merely a rhetorical flourish. In that triplet, Lincoln lays out the three fundamental elements of democracy. The first is consent—government of the people. “According to our ancient faith,” Lincoln said in his 1854 speech objecting to the Kansas-Nebraska Act, which compromised on slavery, “the just powers of governments are derived from the consent of the governed.” That meant plainly “that no man is good enough to govern another man, without that other’s consent. I say this is the leading principle—the sheet anchor of American republicanism.”
A second distinctive feature of democracy is the people’s voice in the affairs of governing—government by the people. It matters little whether that active voice is the direct participation of individuals, as in ancient Athens, or through their representatives, as in the American Constitution. From his earliest moments in politics, Lincoln argued that government by the people—through their laws and through elections, and not by mobs with nooses and shotguns—was the only legitimate expression of democracy. “I do not deny the possibility that the people may err in an election,” he conceded in 1861. “But if they do, the true cure is in the next election.”
The third basic element of democracy is a government that serves the interests of the people—government for the people—not those of a monarch, an aristocracy or an angry and contemptuous elite. For that reason, Lincoln wrote, government served to do only those things that need “to be done, but which they can not, by individual effort, do at all, or do so well, for themselves,” such as roads and bridges, schools and asylums, the enforcement of the laws and the defense of the nation. While government isn’t “charged with the duty of redressing, or preventing, all the wrongs in the world,” he said in 1859, it does have the responsibility to keep from “planting and cultivating too many thorns in the bosom of society.”
Lincoln’s address at Gettysburg wasn’t an explosion of rhetorical fireworks. That kind of speaking was reserved for Everett’s 13,000-word oration, teeming with classical allusions to Thucydides and Pericles but without a single sentence anyone could remember afterward. Lincoln’s was an essay on why American democracy had been founded, why it was worth the sacrifice to preserve, and what the country could anticipate if it emerged whole from the conflict. The example of that sacrifice would stimulate “a new birth of freedom,” like the new birth revival preachers had exhorted people to embrace—a revitalization of the original purpose of the American Founding that would, as Lincoln said in 1858, “turn this government back into the channel in which the framers of the Constitution originally placed it.”
That new birth is the task that lies before every succeeding generation of Americans. In it, we find our way not only back to Lincoln but to democracy itself. We return to the dignity of a human form that can stand upright before its Creator, with no autocrat or prince casting an intervening shadow, with hands outstretched to nature and its God, and to each other. When we do, the shades of those Lincoln honored at Gettysburg will embrace us, as the sun shines again on government of the people, by the people, for the people.
Mr. Guelzo is director of the Initiative on Politics and Statesmanship at Princeton University’s James Madison Program.
To Subscribe Just Click This Link
Image Credit:
https://www.whitehouse.gov/about-the-white-house/presidents/abraham-lincoln/