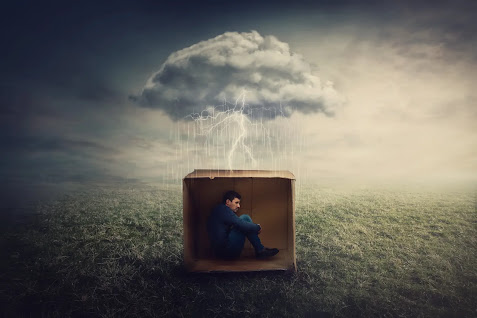 I am not clear what artist produced the image above. I got it from a September 10, 2022, "Guest Essay" in The New York Times, which was focused, mainly, on the poetry of John Donne. This image has also been employed to illustrate an article on how to build a storm shed. That storm shed article is practical in its advice, and far from poetic in its intentions. A five-sided cardboard box is not a recommended technique.
If you are anything like me, a reference to John Donne calls forth, immediately, the following lines, which I find are lodged in some very deep part of my memory. Maybe I have Ernest Hemingway to thank, not Donne, but "For Whom The Bell Tolls" is what I think of when Donne's name appears:

No man is an island,
Entire of itself.
Each is a piece of the continent,
A part of the main.
If a clod be washed away by the sea,
Europe is the less.
As well as if a promontory were.
As well as if a manor of thine own
Or of thine friend's were.
Each man's death diminishes me,
For I am involved in mankind.
Therefore, send not to know
For whom the bell tolls,
It tolls for thee.

This verse, proclaiming that we are "all in this together," is a statement so profoundly true that once Donne's words have been heard, and understood, they can never be forgotten.
Unfortunately, we all, and all too often, forget the implications of these words, even though we might be able to recite the words from memory. Each one of us, in fact, is "involved in mankind," but this is not always the foremost thought in our minds. Because it is not, and because we usually think of our individual selves, first and foremost, we find ourselves, in our time, about to lose the entire world, with human civilization itself in danger of being "washed away" by the rising seas - or, perhaps, to be burned away by a fire set by our own neglectfulness of the truth to which Donne's poem attempts to call us.
Katherine Rundell's "Guest Essay" in The Times, "What John Donne Knew About Death Can Teach Us a Lot About Life," is not, really, focused on the "we are all in this together" lesson of "For Whom The Bell Tolls." Instead, Rundell cites to Donne for another proposition entirely - that we must "remember Death," Memento Mori, which is another topic about which I have written - and more than once - in these blog postings.
Rundell tells us, first (which I did not know), that Donne was an acclaimed preacher of the Gospel, the Dean of St. Paul's Cathedral, in London, and that when he preached crowds thronged to hear him:

His preaching was famous across the whole of London. His congregation — merchants, aristocrats, actors in elaborate ruffs, the whole of the city’s elite — came to his sermons. Some carried paper and ink to write down his finest passages and take them home to relish and dissect them. Donne often wept in the pulpit, in joy and in sorrow, and his audience would weep with him.

On one occasion, it seems, the surging crowds trampled, almost to death, some members of the crowd who experienced the misfortune of slipping to the pavements as the crowds pushed forwards towards Donne:

A contemporary wrote in a letter, “Two or three were endangered, and taken up dead for the time.” There’s no record of Donne halting his sermon; so it’s not impossible that he kept going in his rich, authoritative voice as the bloodied men were carried off and out of sight.

How we should confront Death is the theme of Rundell's "Guest Essay."

John Donne was honest about death and its place in the task of living, just as he insisted on joy. Both his life and his work tell us the same thing: It is only by keeping death nearby that one can truly live.

Confronted with the thought of death, many of us perform the psychological equivalent of hiding in a box with our knees under our chin. But Donne saluted death; he wrote death poetry, he threw it parties. He had a memento mori that he left to a friend in his will, “the picture called The Skeleton which hangs in the hall.” For Donne, that we are born astride the grave was a truth to welcome.

Death — the looming fact of it, its finality and clarifying power — calls us to attention and wakes us up to life.

Just as with his reminder that each one of us is "involved in mankind," Donne's urging that we "Remember Death" is good advice. The consequence of grasping what Donne says about Death is that the meaningfulness of our Life is elevated. Remembering the inevitability of our Death has a corollary - that we must use this always-disappearing moment in which we are now alive to act, to "do something," to live!
Oliver Wendell Holmes, Jr., in a speech made on May 30, 1884, addressed this subject as follows. These are famous words for any student of American history, less poetic than Donne might have said them, but as profoundly true as if they came from a great poet:

As life is action and passion, it is required of a man that he should share the passion and action of his time at peril of being judged not to have lived.

If we consider the image that Rundell used in her "Guest Essay," we will come to understand that our lives are truly made meaningful when we get "out in the weather," instead of seeking "shelter" as a prize for which we ought to look.
As the seas rise, and the fires burn, there is much to do. We are "all in this together," and it is time to change the trajectory of the history that we can see being written all around us. Let us do so. Let us truly live.
Let us get out in the weather and change the world!
To Subscribe Just Click This Link
Image Credit:
https://www.nytimes.com/2022/09/10/opinion/john-donne-death.html