Where the Reckless Try to Outrace the Tide
HOLY ISLAND, England — The off-duty police officer was confident he could make it back to the mainland without incident, despite islanders warning him not to risk the incoming tide.

“Nah,” the officer was reported to have said. “That’s just to frighten the tourists.”

About a half-hour later, he “was standing on the roof of his VW Golf car with a rescue helicopter above him, with a winch coming down to scoop him, his wife and his child to safety,” said Ian Clayton, from the Royal National Lifeboat Institution, a nonprofit organization whose inflatable lifeboat is often called on to rescue the reckless.

Few events in life are as certain as the tide that twice daily cascades across the causeway that connects Holy Island with the English coastline, temporarily severing its link to the mainland.

Yet for some, it still manages to come as a surprise.

The picture above, and the engaging story, come from The New York Times. Click this link, or the link above, to read the whole article (paywall policies permitting).
As for that, "I'm With Stupid" headline, I am postulating that this is what the wife of that off-duty police officer was either thinking, or actually saying, as she was hauled into that helicopter along with her young child.
Aside from the entertainment value of the story from The Times, I wrote this brief blog posting to suggest that we are all in the position of that off-duty police officer, and are being continually warned by those who are in a position to know that a global warming tide is rolling in, and that we are in great danger of drowning as that tide does come.
We may all like the feeling of being married to the reassuring thought that things aren't going to be quite as bad as we have being told, but if that's how we are handling the warnings being provided to us, we might as well buy one of those "I'm With Stupid" T-shirts.
I would suggest ordering one that has the arrow pointing straight up, rather than to one side or the other. 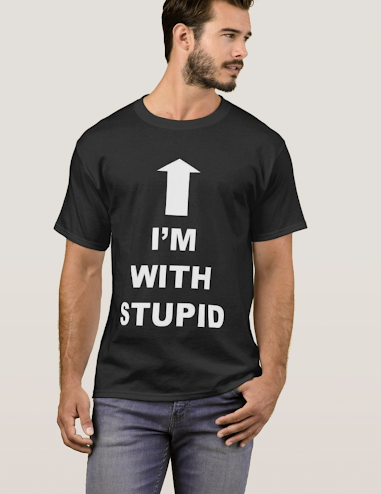