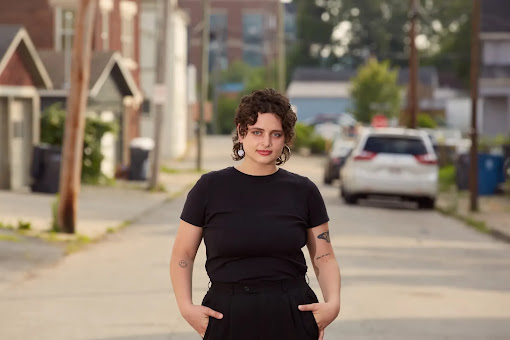 Ellis McCarthy is pictured above. She is not the football Ellis McCarthy, who is much more famous. The Ellis McCarthy pictured here is one of the "young voters" whose views are discussed in an article in The New York Times, authored by Maya King and Jonathan Weisman. The King-Weisman article, which is definitely worth reading, is titled, "Young Voters Are Fed Up With Their (Much) Older Leaders."
Accompanying the King-Weisman news article, in the very same edition of the paper, though not specifically referencing it, is an opinion column written by veteran ("much older") columnist David Brooks. Speculating on what's ahead politically, Brooks tells us to "get ready for... turmoil." Brooks lists at least five reasons to expect that political turmoil is coming for us. He thinks we're in a "prerevolutionary" period. Ben Davis, writing in The Guardian, pretty much concurs.
I am currently reading a book on the French Revolution, A New World Begins, by Jeremy D. Popkin. I have mentioned Popkin's book before, and I am pretty sure I will want to comment later, too, when I have finished my reading. So far, Popkin's book suggests that caution is appropriate as "revolution" is contemplated.
I, personally, feel pretty comfortable with the idea of "revolution," but my feelings about the topic are largely based on what Hannah Arendt has to say in her book, On Revolution. Arendt is not much of a fan of the French Revolution, but she thinks that the American Revolution was actually pretty good.
I would like to suggest that we take seriously the idea that we are in a "prerevolutionary" time. If we do take that seriously, it would be appropriate also to recognize that we shouldn't just be standing around and acting as "observers" as revolutionary events unfold. "Revolutions" are carried out by those who "act," not by those who "watch." It's the same rule as with politics in general. If we want a "good" revolution, not a "bad" revolution, we're going to have to get involved ourselves. This is, largely, the point made in that Guardian column by Ben Davis.
That revolutions call for "action," not just "observation," is an insight that applies both to the "young" and to the "old." Let's get clear about that! Those who are "much older" don't have to ignore or resist calls for fundamental change. They can join those fed-up younger voters, right on the front lines.
That's my idea of a good time!
To Subscribe Just Click This Link
Image Credit:
https://www.nytimes.com/2022/07/14/us/politics/youth-voters-midterms-polling.html