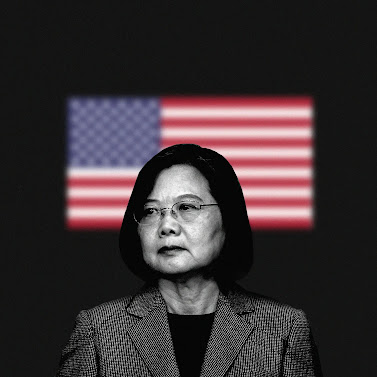 President Joe Biden pledged, on May 23, 2022, that the United States would defend Taiwan should it be attacked by China. By "defend," the President made clear, he meant that the United States would act militarily against China. You can click the link for a New York Times article on Biden's statement. The Times has included a video link in its article, so you can actually see, for yourself, what the President said.
Oriana Skylar Mastro, also writing in The Times, says that "Defending Taiwan Would Be a Mistake." That is the headline that appeared in the hard copy edition of the newspaper. Online, Mastro's advisory is titled, "Biden Says We’ve Got Taiwan’s Back. But Do We?"
Mastro qualifies as an "expert." She is a Center Fellow at the Freeman Spogli Institute for International Studies, at Stanford University, where her research focuses on "Chinese military and security policy, Asia-Pacific security issues, war termination, nuclear dynamics and coercive diplomacy."
Just as an aside, I guess that those of us who might have contrasted "coercion" with "diplomacy" are sadly misinformed, at least from the point of view of those who spend all their time thinking about military conflict and who see such military conflict as a natural and appropriate way to solve real world problems.
Mastro's suggestion that President Biden has made a mistake by veering off from the longtime U.S. policy of "strategic ambiguity" with respect to any possible military intervention in the defense of Taiwan, is based not on any idea that military intervention isn't the best available tool, but is solely premised on Mastro's evaluation that the U.S. would probably "lose," not "win," in a military confrontation with China.
Biden was "blustering." That is Mastro's analysis, and because the United States can't back up the bluster, the President's statement made things more dangerous for Taiwan, and more dangerous for us. In fact, says Mastro, what the President's promise will actually mean is that China will be more likely to launch a preemptive attack on the military forces of the United States. Whoops! Not the expected scenario suggested by the president. Next stop, nuclear war!
I am most emphatically NOT an "expert" in "war termination, nuclear dynamics and coercive diplomacy," as Mastro's personal website declares her to be. However, I do think that I am a relatively intelligent and thoughtful person whose ideas should not be dismissed because of the lack of my "expertise."
And here is what I think. I think that Mastro's pronouncements are intended to convince U.S. policymakers, from the President on down, to spend more money on military "preparedness," which means less money for projects to combat global warming, and projects that might help uplift those, in our country and elsewhere, who are imperiled by poverty, in all of its manifestations. Mastro is, besides her credentials previously outlined, also a fellow of the American Enterprise Institute (a reliable advocate for the military-industrial complex). If you click that link, you will discover that the AEI is bragging that "Democracies Can Out-Compete the China-Russia Alliance."
Here is what I think #2: What Mastro and the American Enterprise Institute are suggesting is conduct that has proven its failure, time and time again. From Vietnam, to Iraq, to Afghanistan, "military" approaches to real world problems (and disputes) is bankrupt. Not only "morally" bankrupt, but bankrupt as to its effectiveness.
Popular songwriters know better than all the "experts" and the politicians, and here is what the world needs now:
To Subscribe Just Click This Link
Image Credits:
https://www.nytimes.com/2022/05/27/opinion/biden-taiwan-defense-china.html