One immediate and important purpose of this blog posting is to encourage those who live in or who can easily visit Santa Cruz County to attend a performance of An Iliad, now being presented by the Jewel Theatre Company.
The image at the very bottom of this blog posting, from the Jewel Theatre website, is not clickable, but the link to the tittle of the play, as presented in the preceding paragraph, most certainly is! Click that link and you'll be taken to the place where you can book your tickets! I am recommending that readers do that, and thus expose themselves to The Iliad, traditionally attributed to Homer, and a poem that is generally appreciated as one of the greatest works of human literature.
If you can't attend a performance of An Iliad at the Jewel Theatre (and I really hope you can), you can click the following link, and learn about The Iliad, or The Poem of Force. That link will tell you how to order a copy of a little pamphlet with that title, published by Pendle Hill, a Quaker retreat and conference center for religious and social study, located in Wallingford, Pennsylvania.
I first read the Pendle Hill Pamphlet in 1964. The pamphlet was authored by Simone Weil, a French philosopher, mystic, and political activist, who died in 1943, the year I was born. Albert Camus described Weil as "the only great spirit of our times."
Weil was much beloved by Hannah Arendt, which is, I feel certain, why I was inspired to purchase the pamphlet with her writing on the Iliad (Pendle Hill Pamphlet #91, then listed at the price of 45 cents). I have since subscribed to the Pendle Hill Pamphlet series, and I now have all of the pamphlets, from #91 to the latest, #469. These pamphlets, adding up, have commandeered over three feet of shelf space in the bookcase in my bedroom.  If you want to find out what Quakers think, you can subscribe to the Pendle Hill pamphlet series, too.
BACK TO THE PLAY:
The Iliad, which is a poem not a play, is one of the most powerful anti-war statements ever made. As Weil says:

This poem is a miracle. Its bitterness is the only justifiable bitterness, for it springs from the subjections of the human spirit to force, that is, in the last analysis, to matter.... No one in the Iliad is spared by it, as no one on earth is. No one who succumbs to it is by virtue of this fact regarded with contempt. Whoever, within his own soul and in human relations, escapes the dominion of force is loved but loved sorrowfully because of the threat of destruction that constantly hangs over him.

In the Jewel Theatre production, the power of the Iliad is dramatically amplified by the prodigious performance of Patty Gallagher. The play is a theatrical tour de force. It is also one of the most profoundly moving anti-war statements that I can remember having seen - more impactful than the poem itself. Better even than Simone Weil's statement, which is very, very powerful in its own right.
The war in Ukraine is featured. In Gallagher's performance we are there, even as we are back on the battlefields of Troy. We are in each and every hometown in America. Gallagher's performance brought me to tears. You should see this play, and watch Patty Gallagher do something I bet you will never have seen before!
Yesterday, the President of the United States indicated that he was prepared to have the United States do battle with China, should China attack Taiwan. The war in Ukraine continues, with death and devastation growing, and with the threat of nuclear annihilation hanging over the conflict as it continues. Any war with China would certainly pose the same, or even greater, risk.
As Peter, Paul, And Mary sang to us, "When will we we ever learn? When will we ever learn?"
The "they" in the song's lyrics has been transmuted to "we" in what I have written above. You can click the link to see a live Peter, Paul, And Mary performance. The "they" they sing about means you and me!
We must escape the doom of war, which subjects the human spirit to the power of mere force, and thus obliterates all that is precious in what we think, and in what we say, and in what we do. Listen to that Peter, Paul, and Mary song. We must learn.
And listen to Pete Seeger, too. The video is powerful. As he tells us, we must put an end to war!
Finally (and last but not least in this list of assignments) watch the play.
Become inspired. 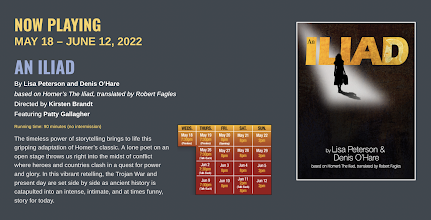