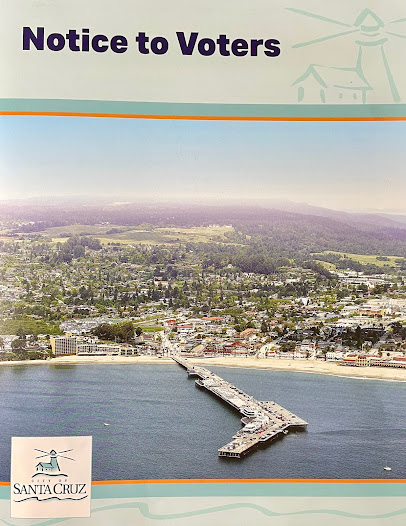 There is an election coming soon to a mailbox near you. We are all getting a mail ballot for the upcoming "June 7th" election, and I think we can expect a ballot to show up in our mailbox any day now. Maybe even tomorrow! As soon as you get your ballot you can vote, so June 7th is just a "deadline," not the only date that counts.
Campaign-related mailings have already reached me - and probably you - preparing us to do our duty as registered voters. One of the mailings I have received is shown above. It comes from the City of Santa Cruz, which wants City voters to tax themselves more, to provide the City with additional money.
Specifically, Measure F asks us to raise the sales tax in the City of Santa Cruz by half a cent. As the mailer tells us (assuming that many of us probably can't "do the math" ourselves), the new tax will add just "5 cents to a $10 purchase."
The way I read the mailer, the implication is that we will hardly even notice this new tax - though poor people will notice it more, of course, since the sales tax is well known to be "regressive," hitting poorer people harder than those who are better off. The City's tax mailer doesn't provide us any information about the regressive nature of the proposed tax. What it does do is to tell us about things that the City might do with all the new money that the new tax would produce.
For instance, the tax would generate money that could be used to "connect the homeless to mental health, substance abuse and addiction services." Or, the money could be used to "invest in affordable housing for low- and moderate-income households."
Those expenditures sounds pretty good to me - and maybe to you! However, hang on for a minute.
The money from Measure F could also be used to increase the salaries of the already-well-paid City Manager and other top administrators. The money could be used to hire more pricey planning consultants, to help persuade us that twenty-story residential towers on Front Street at the San Lorenzo River would really make our lives much better (that is actually a real proposal, by the way, currently under consideration).
In other words, here's the bottom line on Measure F:
The money generated by the proposed new tax could be used for ANYTHING the City Council wants to use it for.
The City's "Notice to Voters" doesn't tell you that!
I got interested in this subject because a local voter contacted me about the legality of the City's campaign mailer, as referenced in this blog posting. I was asked if it were legal for the City of Santa Cruz to use City taxpayer money to campaign in favor of this City tax measure (so the City could get even more of the voters' money). That was the question posed to me, and I did know the answer, which you can read for yourself on the Fair Political Practices Commission website:

Generally, a payment for a communication that does not expressly advocate for or against a candidate or measure or urge a result in an election, when taken as a whole and in context, does not constitute a contribution or independent expenditure.

Now, if you are a voter in the City of Santa Cruz, my bet is that you, too, got a copy of the Measure F mailing called, "Notice to Voters." Read it through and see whether you think that the mailer represents political advocacy for the passage of Measure F, when that mailer is "taken as a whole and in context." Is it "advocacy"? If it is, then City taxpayer funds should not have been used to design, print, and mail it to the voters. Or, is this mailer just "information," not "advocacy"? If that's true, it would be legal to use City taxpayer funds to send out the mailer.
I know what I think, and I think that, "taken as a whole," a City mailer that tells you all the "good things" that the City could do with the new tax money it wants you to authorize, but never tells you about all the less desirable things the money could be used for, is not just "informational." A mailer like that is "advocacy." It is not what Fox News would call "fair and balanced."
Is the City's campaign tax mailer "fair and balanced"? Is it "information," or is it "advocacy"?
You decide! That's what Fox News would tell you.
Or, you could file a complaint with the Fair Political Practices Commission and let the Commission decide! That's what I told the local voter who contacted me. That's what I am telling you, too!
To Subscribe Just Click This Link
Image Credits:
City of Santa Cruz / Gary A. Patton