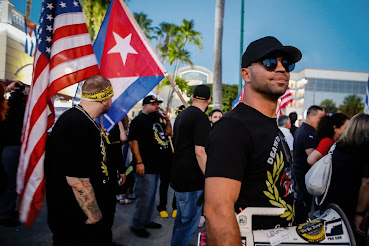 Pictured is Enrique Tarrio, former leader of the "Proud Boys," which Wikipedia describes as "an American far-right, neo-fascist, and exclusively male organization that promotes and engages in political violence in the United States."
An article in the March 15, 2022, edition of The New York Times, reporting on criminal charges brought against Tarrio, says that there was a plan to storm other buildings in Washington, D.C., on January 6, 2021. In other words, what happened at the Capitol Building was not just a protest that "got out a little out of hand."
A document titled, "1776 Returns" contained a detailed proposal to occupy six House and Senate office buildings, and the Supreme Court, as part of the January 6th effort to prevent the certification of the electoral votes that formalized the election of President Joe Biden. It is not clear, according to the article, who actually wrote the plan, but the Proud Boys seem to have been implicated in wanting to execute it.
I was struck by one detail, as reported in The Times' article. Besides suggesting various tactics to help gain control of the designated buildings, the plan even included specific chants, to be employed by the invaders and their supporters, including this one:
"No Trump, No America"
Suggesting that the essence of our nation's existence could ever be linked to a single person, is a suggestion that the Preamble of the Constitution needs to be modified. Let's not forget what it says:
We, The People...
"I, The President" doesn't quite capture the democratic idea, does it?
Image Credit:
https://www.nytimes.com/2022/03/14/us/politics/enrique-tarrio-jan-6-document.html
To Subscribe Just Click This Link