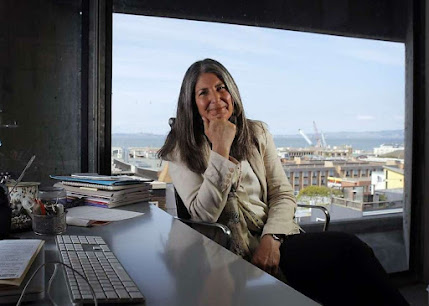 Jeannene Przyblyski (pronounced as sha-bil-ski), who is pictured above, was the dean of academic affairs at the San Francisco Art Institute.  She died on January 24, 2022, of amyotrophic lateral sclerosis (ALS), often called "Lou Gherig's disease." Clicking on that link to her name will take you to a very nice obituary, published in the February 27, 2022, edition of The San Francisco Chronicle. If that obituary turns out to be paywall protected (quite possible, I fear), this link will take you to a different obituary, which will give you a sense of Przyblyski's life and accomplishments.
The Chronicle obituary was headlined, "S.F. art school dean used craft to tell untold stories of the city." As it turned out, Przyblyski was most certainly not an academic bureaucrat:

Jeannene Przyblyski’s career as a conceptual artist defied easy categorization. But one might distill her style and approach to her craft by looking to a potion she created of San Francisco street smells — one that included the mingling scents of fog, wood and street — that she sold as a perfume called “Urban Essence.”

It was one of many acts of conceptual and performance art that Przyblyski created as part of the Bureau of Urban Secrets, which she once described as “an unprofitable think tank that practices history as public art. It asks people how the stuff of the city can be art if you look at it the right way.”

She had business cards designed to look like something a private eye might carry. Her work with the bureau could have been a full-time job, except that she already had one as professor and vice president and dean of academic affairs at the San Francisco Art Institute.

Seeing one's life as the life of an investigator, searching out the "secrets" of the place you live, and of the time in which you live, seems like an extraordinarily nice way to conceptualize the adventure of being alive.
We all are alive in a particular time and place, and discovering the "secrets" of where we are is a wonderful way to discover the kind of "good life" I mentioned in my blog post yesterday.
Przyblyski really did invent a perfume called "Urban Essence," and sold it, too, and she "determined that the perfume would be available until I actually smelled it on somebody, and then it would go out of circulation." One evening, at a dinner party, she was talking to the woman seated next to her, and Przyblyski "took a big whiff and said, 'You're wearing Urban Essence.'" And the woman said, "Yes. I love it." And Przyblyski followed through with her perfume promise, and "pulled it out of production."
How much is that like life itself? Before our secrets are ever fully revealed, we are "pulled out of production." I sense Przyblyski lived her life with joy. So should we all! 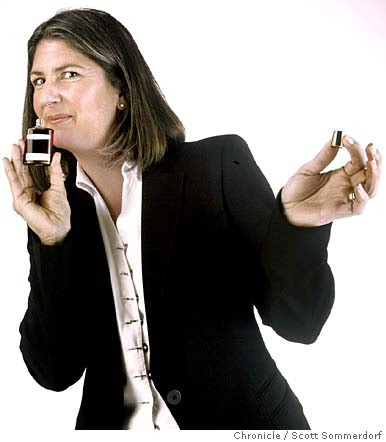