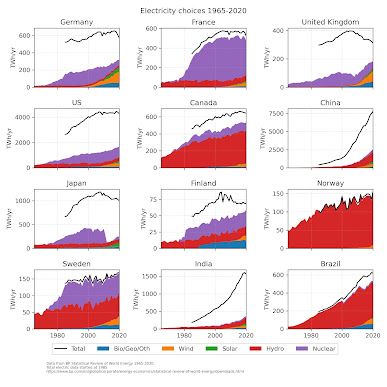 A local climate activist from Santa Cruz, California, has sent this chart around. The original source, as I understand it, is data gleaned from a British Petroleum publication, (BP) Statistical Review data for electricity from 1965-2020. That data has been plotted to show how the various nations are providing for their total electricity needs.
The distance between the colored segments and the black line at the top represents the use of fossil fuel. Note also the so-called "Y" axis (the vertical access). Some nations use a LOT more electrical energy than others. Sweden and Norway, which are meeting their energy needs with a minimum use of fossil fuel, are also using a lot less electricity ("TWh," which is what is being measured on that vertical axis, means "Terrawatt-hours"). The United States, not only produces a lot of its electricity with fossil fuels, it uses massively more electricity than any other nation in the world.
What can this chart tell us?
What this chart can tell us is that if we want to stop the global warming (and the associated "climate crisis") that is putting the planet in peril, the United States needs to start doing a lot more to reduce emissions, and it needs to go on an aggressive electricity diet, starting right now!
Image Credit:
UCSC Climate Coalition Email, 3-15-22
To Subscribe Just Click This Link