#20 / A Thank You And The Counterpunch 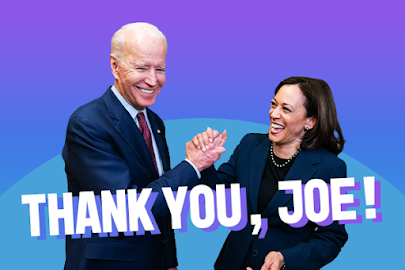 Today marks the end of President Biden's first year in office. The Democratic Governors' Association has suggested, by way of an email, that I endorse an online statement of appreciation for the president's efforts during this past year, a period in which our country has faced all sorts of dangers and difficulties. The image above came with the email from the Democratic Governors' Association.
I am a registered Democrat, but I would eschew any self-congratulation about that. I am happy that my personal involvement in politics, for the most part, has been in the context of local (nonpartisan) government, because I am not much enamored of either of our national parties, as they are currently operating at both the state and national level.
The Democrats are doing a lot better than the Republicans, of course - at least that is my view - and it would be hard to overstate how happy I am that Joe Biden, not Donald Trump, is now our president. Still, celebratory statements, giving the impression that "all's well with the Democratic Party," and that we should all be enthused, with a big smile on our faces [thanks, Kamala for modeling that], don't seem appropriate to me.
The same day that I got the email invitation I just mentioned, I also received an email link to various articles published by Counterpunch. Two, in particular, struck me as right on target.
First, H. Bruce Franklin, who was teaching at Stanford University while I was there, published an article titled, "Ready for Another Game of Russian Roulette?" Here's how Franklin starts the article:
As the U.S. moves nuclear forces closer and closer to the border of Russia, and as our corporate media bang their war drums louder and louder, does anyone remember the Cuban missile crisis?
Actually, I do remember the Cuban missile crisis, and I think that Franklin is correct that this confrontation between the world's two largest nuclear powers was caused by the United States, at least as much as by the Soviet Union. Are we heading for another "here we go again moment," as Franklin's article suggests? If so, the United States, under the leadership of our current president, is arguably just as responsible as the arch-ogre Vladimir Putin.
Here is how Franklin ended his article in Counterpunch. As a draft resister during the Vietnam War, the last line, especially, resonated with me:

The president [President Kennedy] inspired many of us with an eloquent June 1963 American University commencement address about the world’s crucial need for an enduring peace. He even urged “every thoughtful citizen” who desired peace to “begin by looking inward—by examining his own attitude toward peace, toward the Soviet Union,” which he extolled for its heroic World War II sacrifices. But then of course he went on to claim: “The Communist drive to impose their political and economic system on others is the primary cause of world tension today.” Since today Russia is as capitalist as Saudi Arabia, Australia, and United States, what is “the primary cause of world tension today?”

President Kennedy’s final remarks began with this statement: “The United States, as the world knows, will never start a war.” So it must have been Vietnam that started a war with the United States (emphasis added).

Christopher Hedges also writes for Counterpunch. His article, a link to which came in the same advisory email with the Franklin article, was titled, "America's New Class War."
I commend both of these articles to you. The Hedges article, in particular, points out exactly why Democrats should not feel overly celebratory about the Democratic Party.
My pitch is always for more "self-government," which means that we, ourselves, need to become engaged in government. Unfortunately (and this is the point of both the Franklin and the Hedges article), we can't do that, effectively, by simply backing the Democrats against the Republicans. Picking the better of the two parties, and voting for its candidates is "necessary," but not, I am afraid, "sufficient."
To Subscribe Just Click This Link
Image Credit:
January 19, 2022 email from info@democraticgovernors.org