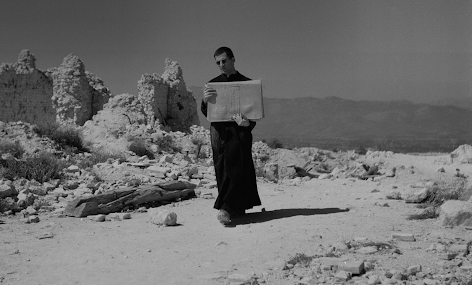 The article from which the above image was taken is titled, "How to pray to a dead God." I think it's worth reading. The article, by Ed Simon, appeared shortly before Christmas in Aeon, an online magazine. Simon's article is accompanied by the following statement:

The modern world is disenchanted. God remains dead. But our need for transcendence lives on. How should we fulfill it?

That's a good question, right? Might we not, though, have to interrogate the premises, in order to answer that question? If we actually do have a "need" for transcendence, and if "God remains dead," is there any way to get out of that box without reexamining the "God is dead" formula - or without deciding that we may not need transcendence, after all?
Of course, finding a way out of that box, a way that we might fulfill that stipulated need for transcendence without any reliance on "God," is the exact assignment to which Simon applies himself in his article. You can click the link in the first line of this blog posting to read the whole thing yourself, to see how well Simon does, and to see how he constructs his argument. The last paragraph of Simon's article will give you an idea of where he ends up:

Eleven centuries before [Matthew] Arnold heard the roar of faith’s tide [receding] and Nietzsche declared that God was dead, the Hindu sage Adi Shankara recounted a parable in his commentary to the Brahma Sutras, a text that was [then] already a millennium old. Shankara writes that the great teacher Bhadva was asked by a student what Brahma – the ground of all Being – actually was. According to Shankara, Bhadva was silent. Thinking that perhaps he had not been heard, the student asked again, but still Bhadva was quiet. Again, the student repeated his question – ‘What is God?’ – and, again, Bhadva would not answer. Finally, exasperated, the young man demanded to know why Bhadva would not respond to the question. ‘I am teaching you,’ Bhadva replied.

I have always liked the way Iris DeMent responds to the question. Her guidance, the way I interpret it, is not unlike the response of the Hindu sage cited by Simon. DeMent. though, does use words (and music, of course) to arrive at that same destination. If you are not familiar with DeMent's "Let The Mystery Be," give that link a click!
I have my own answer to Simon's question about how we fulfill our need for transcendence in a time when God is dead, and I think my way of thinking about and responding to the question is consistent with what both DeMent and Bhadva give as their responses. I'd like to think that my response is a little more "affirmative," though.
I don't want to try to put any words into God's mouth - which is what "religion" has consistently tried to do, since the very beginning, and what I think has ultimately led to that ebbing of the tide of faith that Matthew Arnold noted in "Dover Beach." In fact, God the Creator is either real, and present, or not, and what humans think, and what humans have to say on the subject, has no impact whatsoever on the truth - on the reality of our human situation. If the tide of human opinion has run out - and faith has ebbed that God the Creator exists - the fact that a large majority, including philosophers and scientists, do not believe that God is either real or present does not, actually, provide us with any certain result. If we care about the truth, human opinion can't possibly settle the matter - and that "human opinion" includes all the science in the world. The fact that our formulations and explanations are only that - explanations and not any final and certain knowledge of whether God is the Creator of the universe, or not - is why the question Simon addresses keeps coming on around.
As Bhadva indicates, by his silence, we would best understand the ultimate realities of our existence by dispensing with words, and instead of trying to "say" what God is all about, and what God is not, we should just "let the mystery be."
As for whether we actually "need" transcendence, that, too, can never be "proven." All the science in the world will never be able finally to demonstrate that there either is some transcendent dimension of our lives, or that the contrary is the case. It may be that nothing exists but elegantly arranged atoms and molecules, spun by chance - and that this is what we observe in the starry, starry nights we are sometimes so privileged to experience. It may be that it is only those atoms and molecules that produce, somehow, that inexpressible something, in the eyes of our loved ones, that goes beyond what any words could ever conjure up or speak (though the poets have tried, sometimes, and sometimes with something like success).
I believe, based on my experience, in God the Creator, and in God's presence in my life, and in the life of the world. I do not presume to say that I am right, and I would never want to pretend that I, or anyone else, can demonstrate the reality of God. I particularly object to the idea that anyone claiming to know God has any right, based on that claim, to tell all the rest of us what we must do. As I say, I think claims like that are what led to that ebbing tide that Matthew Arnold wrote his poem about.
To my mind, Bob Dylan has put the case succinctly - and correctly - as he cuts through the Gordian Knot of our human speculations and conjectures about God and the transcendent. He does so in the following, very simple phrase from his song, "Precious Angel."

This is, I think, Bob Dylan's response to Simon's question, and it is mine as well.
Image Credit:
https://aeon.co/essays/how-to-fulfil-the-need-for-transcendence-after-the-death-of-god
To Subscribe Just Click This Link