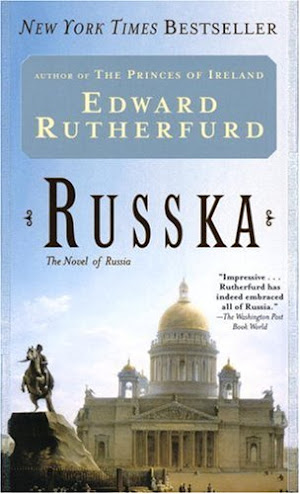 About a week ago, I mentioned Russka, a 1,000-page novel about Russia. That's a pretty long book, but I enjoyed it, and I certainly feel good about recommending it to friends.
The story told in the novel begins in 180 A.D., and ends in 1992, so Lenin didn't show up until rather late in the narrative. In my earlier blog posting, "What Lenin Said," I suggested that the following statement, by Lenin, is a rather "hopeful thought."

There are decades where nothing happens; and there are weeks where decades happen.

What I was counting as "hopeful," of course, is the idea that things can change, and change dramatically for the better, in a rather short period of time. Naturally, there is no guarantee that things will change for the better. That will actually depend on what we do. As we observe our current circumstances, however, and perhaps despair about the possibility of positive change, the idea that we might be able to accomplish positive changes in a short time does count as a "hopeful thought," at least for me.
There is a short passage in Russka, starting on page 665, that has nothing to do with politics - my normal topic - but it is a passage that has stuck with me. It, too, seems very hopeful.
Father Basil, an Orthodox priest, is talking to Tatiana, a character whose role in the novel far eclipses that of Lenin. Tatiana has begun to suspect that she will shortly die, and so she seeks out Father Basil in an isolated hermitage in the woods:

Father Basil resumed his seat and indicated that she should do the same. Then, without asking her any questions, he began to speak quietly, in a deep, firm voice.

"On the subject of our life after death, the Orthodox faith is very clear and quite explicit. You must not think that, at the moment of death, you suffer any loss of consciousness, for this is not the case. Indeed, quite the opposite. Not for an instant do we cease our existence. You will see the familiar world around you but be unable to communicate with it. At the same time, you will encounter the spirits of those who have departed, probably those you have known and loved. Your soul, released from the clinging dross of the body, will be more lively than before; but you will by no means be free of temptations: you will encounter spirits both good and evil and be drawn to them according to your disposition. For two days - I speak in terms familiar to us here on earth - you will be free to roam the world. But on the third day you will face a great and terrible trial. For, as we know from the story of the dormition of the Virgin, the Mother of God herself trembled at the thought of that day when, as we put it, the soul passes through the tollhouses. This day you must fear. You will encounter first one and then another evil spirit; and the extent of your struggle with those evils in life will give you strength, or not, to pass through. Those who do not, go straight to Gehenna. On this day the prayers of those on earth are of great assistance."

One source of our contemporary despair, for those who are feeling despair - those who are feeling within themselves that "sickness unto death" of which Kierkegaard speaks - comes from our knowledge of what we, individually and collectively, have done in this world into which we have been so mysteriously born. We have participated, each one of us, in the defilement of the Earth, the Natural World that ultimately sustains us, and we have stayed silent in the face of, and have even participated in, human injustices of all kinds.
There is also a despair - perhaps the most profound aspect of that "sickness unto death" from which we seek to shield ourselves - that comes from the thought that we are truly "nothing," and that our animal life, when it ends, wipes us away as if we never were.
I assume that Father Basil's assertions are an accurate statement of the Orthodox faith, about which I know, essentially, nothing. Clearly, believing that Father Basil could be correct about what he says is a matter of "faith" not proof. For those who can find such faith, though, and who can contemplate that our "existence" is something more than, and something independent of, the existence of the body we inhabit, what Father Basil says does seem, to me, to be another "hopeful thought."
Image Credit:
https://www.abebooks.com/Russka-Novel-Russia-Rutherfurd-Edward-Ivy/30780385918/bd