#278 / Thinking Your Way To Religious Belief 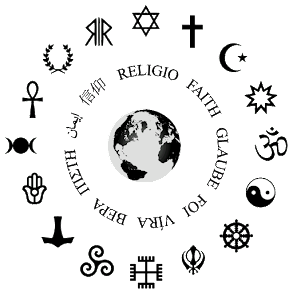 The image above comes from a Wikipedia entry titled, "List of religions and spiritual traditions." The image seemed appropriate to accompany this commentary on a New York Times column written by Ross Douthat.
Douthat's column was headlined, "How to Think Your Way Into Religious Belief." That's the title found in the hard copy version of the Sunday, August 15, 2021, edition of The New York Times. Online, Douthat's column bears this title: "A Guide To Finding Faith."
Douthat's "Guide To Finding Faith" is too long to include here in its entirety, but I'll excerpt several paragraphs that come right at or near the beginning of the column. Here's the first one:

Whenever I write about the decline of organized religion in America, I get a lot of emails expressing some version of this sentiment. Sometimes it’s couched in the form of regretful unbelief: I’d happily go back to church, except for one small detail — we all know there is no God. Sometimes it’s a friendly challenge: OK, smart guy, what should I read to convince me that you’re right about the sky fairy?

Here is what I think is the key phrase in Douthat's report on his email correspondence:

We all know there is no God.

Instead of starting by praying or practicing in defiance of the intellect, you could start by questioning the assumption that it’s really so difficult, so impossible, to credit ideas of God and accounts of supernatural happenings.

The “new atheist” philosopher Daniel Dennett once wrote a book called “Breaking the Spell,” whose title implies that religious faith prevents believers from seeing the world clearly. But what if atheism is actually the prejudice held against the evidence?

In that case, the title of Dennett’s book is actually a good way to describe the materialist defaults in secular culture. They’re like a spell that’s been cast over modern minds, and the fastest way to become religious is to break it.

So ... imagine yourself back in time, to an era — ancient, medieval, pre-Darwin — when you think it made sense for an intelligent person to believe in God. Now consider why your historical self might have been religious: ... because religious ideas seemed to provide an explanation for the most important features of reality.

First, the idea that the universe was created with intent, intelligence and even love explained why the world in which you found yourself had the appearance of a created thing: not just orderly, law-bound and filled with complex systems necessary for human life, but also vivid and beautiful and awesome in a way that resembles and yet exceeds the human capacity for art.

Second, the idea that human beings are fashioned, in some way, in the image of the universe’s creator explained why your own relationship to the world was particularly strange. Your fourth- or 14th-century self was obviously part of nature, an embodied creature with an animal form, and yet your consciousness also seemed to stand outside it, with a peculiar sense of immaterial objectivity, an almost God’s-eye view — constantly analyzing, tinkering, appreciating, passing moral judgment.

Finally, the common religious assumption that humans are material creatures connected to a supernatural plane explained why your world contained so many signs of a higher order of reality, the incredible variety of experiences described as “mystical” or “numinous,” unsettling or terrifying, or just really, really weird — ranging from baseline feelings of oneness and universal love to strange happenings at the threshold of death to encounters with beings that human beings might label (gods and demons, ghosts and faeries) but never fully understand.

Got all that? Good. Now consider the possibility that in our own allegedly disenchanted era, after Galileo, Copernicus, Darwin, Einstein — all of this is still true (emphasis added).

I am rather partial to the argument that Douthat makes in this column, and there are lots of people who have arrived at the conclusion that Douthat has reached - There is a God. Many others have arrived at exactly the opposite conclusion - There isn't a God. One of the nice things about American government (and about the society of which our government is an expression) is our very clear, collective position on this question of whether "There is a God / There isn't a God." Check out the First Amendment if you are not clear on the concept (and do notice that the First Amendment comes "first").
We do not believe, as Americans, that there can be any collectively sanctioned and "authoritative" statement on any question of religion. If one thing could be proved "true," in some conclusive way, and if the other proposition could be demonstrated to be "false," then the First Amendment would not really make any sense. It doesn't make sense to ignore the "truth." In this case, though, as in so many other cases, there really isn't an ability to determine the "truth" of even the most important propositions. We will have to make up our minds on such questions individually.
While I like Douthat's argument, as I report, above, I don't, personally, accept the idea that you can "think your way" into religious belief. I do concur with Douthat, however, that you can't actually "think" your way to the opposite position, either - at least not in the sense that some sort of thinking process can produce certainty, along the lines of "we all know there is no God."
Whatever our thoughts, whichever way they trend - to believe or not to believe there is a God - we would do a lot better to posit our conclusions as a "hypothesis," not as a certainty. The First Amendment suggests this approach, and so does one of my favorite expressions of the right way to think about the debate. As Iris DeMent sings, "No one knows for certain," and we just need to "let the mystery be."
Image Credit:
https://en.wikipedia.org/wiki/List_of_religions_and_spiritual_traditions