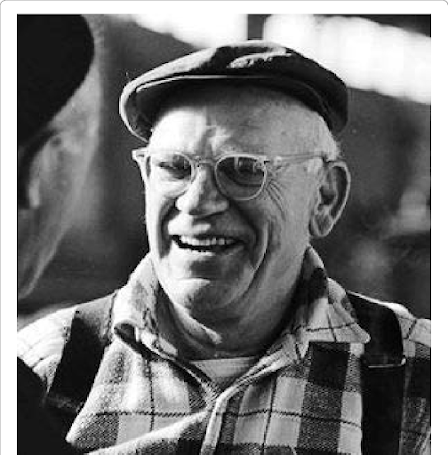 Pictured is Eric Hoffer, sometimes known as the "Longshoreman Philosopher." According to Wikipedia, Hoffer was born in 1902 and died in 1983.
In 2017, talking about Hoffer, The Wall Street Journal said that "no historian, political scientist or journalist of the past 60 years has predicted the current moment with such accuracy." The Journal was talking about the election of Donald J. Trump.
In the 1960s, as a college student at Stanford University, I remember being blown away by Hoffer's books. His most famous book is probably The True Believer: Thoughts on the nature of Mass Movements. That book is still available in print, and if you haven't already read it, I suggest that you do.
I read everything that Hoffer wrote, and with a couple of other Stanford students I once went to Berkeley, where Hoffer was then teaching. He was kind enough to meet with us during his office hours to discuss the concerns we brought him. We approached him as a wise man and a sage who could give us life guidance. Though I no longer have any memory of the particulars and specifics, I am pretty sure that we talked about the War in Vietnam and what we, as young students, could do to change the direction in which our nation was heading.
I was prompted to remember my good fortune in getting to meet with Hoffer personally by a reference to him in the September 2021, edition of In These Times. That magazine, just incidentally, is a publication that is quite a bit different from The Wall Street Journal.
In an editorial titled, "The Political Magic of the Democrats’ Infrastructure Plan," Rick Perlstein quotes Hoffer as follows:

Every great cause begins as a movement, becomes a business and eventually degenerates into a racket.

This is, clearly, a bit of cautionary advice, and it rings true to what I remember about Eric Hoffer. The "Longshoreman Philosopher" did not defer to the supposed greatness of the self-proclaimed "leaders" in the Congress or the agencies. We shouldn't, either. It's great that the Administration has been able to craft an ambitious infrastructure investment plan, but we (the people) had better stay right on top of how all that money is going to be spent.
Take it from Eric!
Image Credit:
https://www.researchgate.net/figure/Eric-Hoffer-1898-1983_fig2_337466964