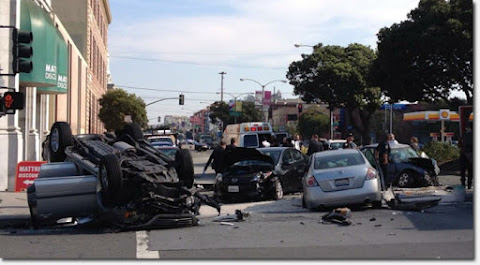 Warren Kozak, writing in the July 26, 2021, edition of The Wall Street Journal, says that "Social Breakdown Starts With Skipping a Stop Sign."
According to Kozak, 2020 was a particularly bad year for traffic fatalities, as they "spiked to their highest levels since 2007." Kozak is a New Yorker, and things seem particularly bad there, the way Kozak tells the story. Significant increases in traffic fatalities have been occurring in New York City, this past year, even though the pandemic has meant that there have been fewer cars on the road in 2020 than in earlier years.
Kozak blames "receding law enforcement" for these statistics, and he bears a particular grudge towards the Attorney General of the State of New York, Letitia James (who happens to be Black). James has apparently "suggested the city's police department no longer make traffic stops because they can lead to police shootings." Even if James is right about that - and I am willing to bet she is - Kozak doesn't think that James' concerns are a good excuse to minimize traffic enforcement: "When traffic laws can be flagrantly ignored, the door opens to more chaos."
While the Kozak-James debate, as outlined above, is obviously an important one, what most interested me, as I read Kozak's column, was a rather different question. I was asking myself, as I read the column,  whether "enforcement" is actually the reason that people obey our laws and regulations. I question that.
My own theory is that people, generally, do what they think is expected of them. They don't stop at stop lights because they think that they will be pulled over by the police if they don't. The threat of enforcement isn't mainly what is on their mind. People stop at stop lights because that is "what people do." People tend to follow "the law" not because they think there will be some immediate sanction if they don't follow the law. They follow the law because people expect them to follow it, which means that this is exactly what they expect of themselves, too.
Kozak is worried about social "chaos," which is definitely a bad thing, and which is always a real possibility in any human society. But more "enforcement" (more troops on the street, in the extreme case) is not, necessarily, the best way to stave off chaos. What we need is a way to increase everyone's understanding of what is, actually, expected of a person who is part of our society. Enforcement plays a part; it shows that our society takes its rules and regulations seriously, but I wonder if that is the best way to get the message across, and to get to the result we want.
I tend to think that more "democracy," meaning more citizen participation in the rulemaking process itself - the political process - is going to do more to build social solidarity than battalions of law enforcement personnel deployed to "get the bad guys off the street."
I think Kozak is right to highlight traffic accidents and fatalities as a sign of increasing social breakdown. He's right to take that seriously. It's just his cure I question!
Image Credit:
https://richmondsfblog.com/2013/10/30/stolen-car-running-red-light-leads-to-major-accident-at-10th-ave-geary/