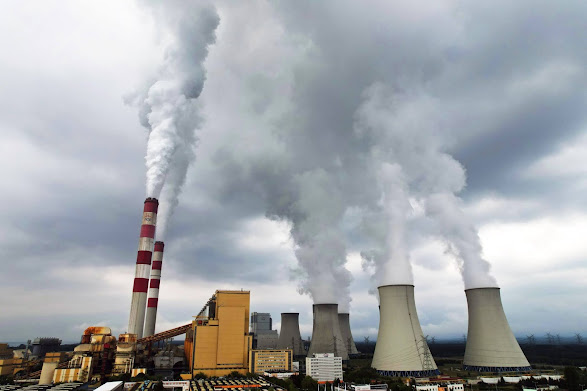 China, EU Plan Sweeping Limits on Emissions. Moves Would Lift Costs for Firms, Consumers, While Environmental Groups Say it Falls Short.
The picture and the headline above come from a front page story on the July 15, 2021, edition of The Wall Street Journal. The article describes the new plans adopted by China and the EU, intended to reduce global warming emissions.
The EU plan seems to include "a broad economic overhaul that would sharply cut the bloc’s reliance on fossil fuels and place first-of-its kind levies on imports from high-emitting countries." As I read this, the EU plan is seeking to apply what might be called economic "sanctions" on non-EU countries that the EU doesn't think are doing what those other countries should do to reduce global warming emissions.
China's plan is described as "an emissions-trading system focused only on its own companies, establishing the world’s largest carbon market and doubling the share of global emissions covered under such programs. Emissions-trading systems put a price on the greenhouse gases generated by industry, increasing the cost of products with the intent of promoting efficiency and cutting emissions." This plan sounds something like the plan adopted in California, under the Global Warming Solutions Act of 2006. California's "Cap and Trade" program is supposed to induce "the market" to reward those who cut their greenhouse gas emissions. Frankly, that approach hasn't worked very well at all.
The only thing that might work, in California, Europe, and in the world at large, is a commitment to the following approach, backed up by effective legal measures, sanctions, and penalties:

If it is technically possible to eliminate or reduce a currently-existing emission of greenhouse gasses, then the elimination or maximum possible reduction of that emission must be accomplished at the earliest time possible.

The "market" will not do what needs to be done. Imposing "sweeping limits," which are "sweeping" only because they are significantly greater than current limits (where there are any limits at all) will be similarly inadequate, which is what the environmental groups are properly saying.
The need to stop the emission of greenhouse gases - immediately - is not just an "inconvenience." It's an imperative. If any emission can be stopped, or reduced, it must be stopped or reduced. That needs to be the rule. That's the only plan that makes sense.
Image Credit:
https://www.wsj.com/articles/eu-to-propose-sweeping-economic-plan-to-combat-climate-change-11626251377