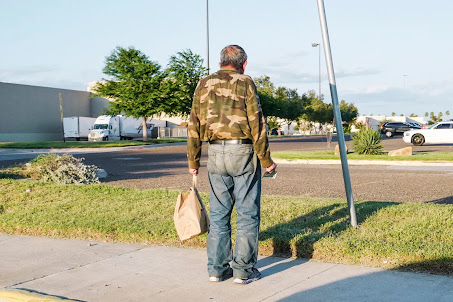 On the same day that Andy Kessler was asserting, in his column in The Wall Street Journal, that something called the Kuznets Curve means that visible evidence of growing economic inequality is just an optical illusion, and that an increase in apparent economic inequality is just a stage on the way to a broadly-shared prosperity,* Ezra Klein was weighing in, on the editorial page of The New York Times, with a completely different view: "What the Rich Don't Admit About the Poor."
I think Klein was right on target in what he said. Therefore, I am condensing his column here, since The Times does deploy a paywall that might frustrate interested persons who click the link above. Before providing my shortened version of Klein's column, though, let me present what I think is the "takeaway" line:

With poverty, to address it, you just eliminate it. You give people enough resources so they’re not poor.

What the Rich Don't Admit About the Poor
Ezra Klein
The American economy runs on poverty, or at least the constant threat of it. Americans like their goods cheap and their services plentiful and the two of them, together, require a sprawling labor force willing to work tough jobs at crummy wages. On the right, the barest glimmer of worker power is treated as a policy emergency, and the whip of poverty, not the lure of higher wages, is the appropriate response....
But it’s not just the right. The financial press, the cable news squawkers and even many on the center-left greet news of labor shortages and price increases with an alarm they rarely bring to the ongoing agonies of poverty or low-wage toil....
Just as I was watching Republican governors try to immiserate low-wage workers who weren’t yet jumping at the chance to return to poorly ventilated kitchens for $9 an hour, I was sent “A Guaranteed Income for the 21st Century,” a plan that seeks to make poverty a thing of the past. The proposal, developed by Naomi Zewde, Kyle Strickland, Kelly Capatosto, Ari Glogower and Darrick Hamilton for the New School’s Institute on Race and Political Economy, would guarantee a $12,500 annual income for every adult and a $4,500 allowance for every child. It’s what wonks call a “negative income tax” plan — unlike a universal basic income, it phases out as households rise into the middle class....
“With poverty, to address it, you just eliminate it,” Hamilton told me. “You give people enough resources so they’re not poor.” Simple, but not cheap....
I suspect the real political problem for a guaranteed income isn’t the costs, but the benefits. A policy like this would give workers the power to make real choices. They could say no to a job they didn’t want, or quit one that exploited them. They could, and would, demand better wages, or take time off to attend school or simply to rest. When we spoke, Hamilton tried to sell it to me as a truer form of capitalism. “People can’t reap the returns of their effort without some baseline level of resources,” he said. “If you lack basic necessities with regards to economic well-being, you have no agency. You’re dictated to by others or live in a miserable state.”
But those in the economy with the power to do the dictating profit from the desperation of low-wage workers. One man’s misery is another man’s quick and affordable at-home lunch delivery....

This is the conversation about poverty that we don’t like to have: We discuss the poor as a pity or a blight, but we rarely admit that America’s high rate of poverty is a policy choice, and there are reasons we choose it over and over again. We typically frame those reasons as questions of fairness (“Why should I have to pay for someone else’s laziness?”) or tough-minded paternalism (“Work is good for people, and if they can live on the dole, they would”). But there’s more to it than that.
It is true, of course, that some might use a guaranteed income to play video games or melt into Netflix. But why are they the center of this conversation? We know full well that America is full of hardworking people who are kept poor by very low wages and harsh circumstance. We know many who want a job can’t find one, and many of the jobs people can find are cruel in ways that would appall anyone sitting comfortably behind a desk. We know the absence of child care and affordable housing and decent public transit makes work, to say nothing of advancement, impossible for many. We know people lose jobs they value because of mental illness or physical disability or other factors beyond their control. We are not so naïve as to believe near-poverty and joblessness to be a comfortable condition or an attractive choice.
Most Americans don’t think of themselves as benefiting from the poverty of others, and I don’t think objections to a guaranteed income would manifest as arguments in favor of impoverishment. Instead, we would see much of what we’re seeing now, only magnified: Fears of inflation, lectures about how the government is subsidizing indolence, paeans to the character-building qualities of low-wage labor, worries that the economy will be strangled by taxes or deficits, anger that Uber and Lyft rides have gotten more expensive, sympathy for the struggling employers who can’t fill open roles rather than for the workers who had good reason not to take those jobs. These would reflect not America’s love of poverty but opposition to the inconveniences that would accompany its elimination....
Nor would these costs be merely imagined. Inflation would be a real risk, as prices often rise when wages rise, and some small businesses would shutter if they had to pay their workers more. There are services many of us enjoy now that would become rarer or costlier if workers had more bargaining power....
Hamilton, to his credit, was honest about these trade-offs. “Progressives don’t like to talk about this,” he told me. “They want this kumbaya moment. They want to say equity is great for everyone when it’s not. We need to shift our values. The capitalist class stands to lose from this policy, that’s unambiguous. They will have better resourced workers they can’t exploit through wages. Their consumer products and services would be more expensive....”

“Ultimately, it’s about us as a society saying these privileges and luxuries and comforts that folks in the middle class — or however we describe these economic classes — have, how much are they worth to us?” Jamila Michener, co-director of the Cornell Center for Health Equity, told me. “And are they worth certain levels of deprivation or suffering or even just inequality among people who are living often very different lives from us? That’s a question we often don’t even ask ourselves (emphasis added).”

But we should.
oooOOOooo
I think Klein is right. I think it is true that we should ask ourselves that question about how much privileges for the better off are worth to us, overall. The root question is whether we are willing to think of ourselves as just a bunch of independent individuals, fundamentally unrelated to each other as far as anything important is concerned. That is how we are doing it now, but there is a different way we might understand our situation. A different understanding would, inevitably, bring a different set of actions into play.
We could - it's a choice - decide to recognize ourselves not as a bunch of independent individuals, but as a community, and to understand, at a profound level, that we are "all in this together." In that understanding, we would need to provide the basics for everyone, and until we did, none of us would be able to be satisfied with the individual life that we, individually, might be privileged to live.
There are various well-known expressions of this way to understand our situation in life - and not all of them are attributed to Jesus of Nazareth, either.

Gandhi said, "Live simply, so that others might simply live."

The term "Ubuntu" is translated, "I am who I am because of who we all are." (Click the link to read my blog posting on the subject, and specifically to read a touching story of how that understanding of who we are makes a difference in how we act).

That's a very short sample of others, beyond Jesus, who get the picture. Are we "in this life together," or not?
I think we are.
In fact, it is my opinion that we will either find a way to "operationalize" this understanding of our mutual interdependence, or we will all, ultimately, perish together, swept away by the disintegration of human society caused by our collective failure to honor the truth of our real situation.
The clearest example of the danger to which we are exposed, I think, is the ongoing and self-caused catastrophe of global warming, with all of its human ramifications. Continuing global warming will definitely include increasing food and water scarcity, and people losing their homes - the basic necessities of life. If those who can provide them for themselves, because they are "rich," ignore those who can't, then the rich will perish, too, along with those who aren't "rich," because though we may want to turn away from this truth, we are "all in this together." We will "sink or swim" together.
Think about it!
Even better, to use Klein's word, admit it!
Image Credit:
https://www.nytimes.com/2021/06/13/opinion/stimulus-unemployment-republicans-poverty.html
=====================================================================
* You can read my blog posting from yesterday to get the whole story