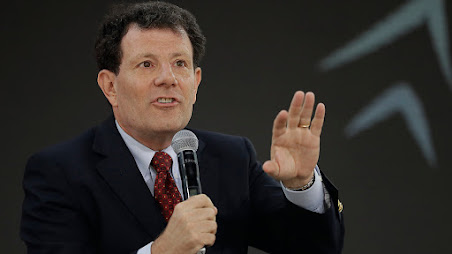 Nicholas Kristof, pictured above, is an opinion writer for The New York Times. He places himself on the "progressive" side of the political spectrum.
On Thursday, June 24, 2021, Kristof wrote a column about the "biggest threat to America." Kristof identifies that "biggest threat" as "America itself," and specifically America's "creeping mediocrity."

America is not back. In terms of our well-being at home and competitiveness abroad, the blunt truth is that America is lagging. In some respects, we are sliding toward mediocrity.

Greeks have higher high school graduation rates. Chileans live longer. Fifteen-year-olds in Russia, Poland, Latvia and many other countries are better at math than their American counterparts — perhaps a metric for where nations will stand in a generation or two.

As for reading, one-fifth of American 15-year-olds can’t read at the level expected of a 10-year-old. How are those millions of Americans going to compete in a globalized economy? As I see it, the greatest threat to America’s future is less a surging China or a rogue Russia than it is our underperformance at home.

We Americans repeat the mantra that “we’re No. 1” even though the latest Social Progress Index, a measure of health, safety and well-being around the world, ranked the United States No. 28. Even worse, the United States was one of only three countries, out of 163, that went backward in well-being over the last decade.

So it’s great that we again have a president respected by the world. But we are not “back,” and we must face the reality that our greatest vulnerability is not what other countries do to us but what we have done to ourselves. The United States cannot achieve its potential when so many Americans are falling short of theirs.

In his comments in his June 24th column, Kristof is focused on the "American Dream," which he identifies as "upward mobility," and which is what Kristof says brought his refugee father to the United States in 1952. If "upward mobility" means an ability to consume more, each year, than the year before - and that is how many would define it - this kind of "dream" might turn out to be more like a nightmare, given the realities of the global warming crisis that we want to ignore, but ultimately can't ignore. More pertinent, I think, is the following observation from Kristof:

“America’s chronic failure to turn its economic strength into social progress is a huge drag on American influence,” said Michael Green, chief executive of the group that publishes the Social Progress Index. “Europeans may envy America’s corporate dynamism but can comfort themselves that they are doing a much better job on a host of social outcomes, from education to health to the environment (emphasis added).

Rather than MORE (more things, more money, and more of everything, always), "social progress" ought really to be the measure of our success. Living better with less. That, really, should be the new form of the "American Dream."
Kristof places his commentary in the context of an international competition: How is the United States doing vis a vis other nations in the world. We may not be "Number 1," as Kristof notes, but he implies that we ought to be.
Well, if "social progress" is the measure of our "American Dream," I have to agree that it would be nice to have our country be a world leader in achieving that. For my part, though, I think that the international "competition" framework isn't the correct one to measure success. I like the very last line of Kristof's column:

To truly bring America back, we should worry less about what others do and more about what we do to ourselves.