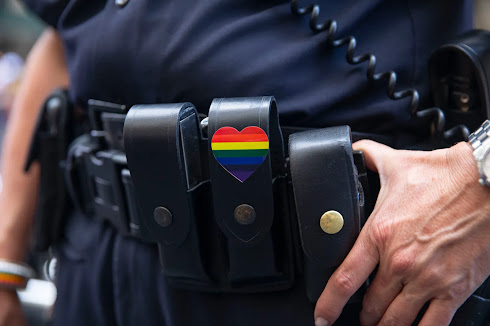 The New York Times has editorialized against a decision by the organizers of the city's annual gay pride parade to ban the participation of uniformed police officers. The parade is scheduled for June 27th this year. Roxane Gay, one of The Times' contributing opinion writers, is fully in support of that decision to ban uniformed police officers, but The Times thinks that banning uniformed officers is a mistake:

If parades are celebrations of community and history, the Pride parade is also about the joy of belonging — of being part of a people knitted together by shared identity and survival. It wasn’t so long ago that L.G.B.T.Q. people were thrilled to cheer for every out person and ally who would march in the parade, including L.G.B.T.Q. police officers, who often received some of the biggest cheers from onlookers. These police officers were vital in helping make the L.G.B.T.Q. community more visible and varied in a nation slow to overcome old stereotypes and fears. Today, at a time when Republican legislatures are attacking transgender rights across the country, it’s a strange moment for the L.G.B.T.Q. community to be closing the door on some of its own and missing an opportunity to broaden its coalition.

The New York City Pride organizers’ decision is part of a worrisome trend in recent years of Pride organizers who have barred uniformed officers from marching in cities like Toronto and Vancouver, or have tried to do so, in places like Sacramento and St. Louis. Taking a pledge to protect and serve your city should not mean sacrificing the chance to be included in a community celebration of your identity.

Ana Arboleda, a sergeant in the New York Police Department - and who is also a lesbian - told The Times that she feels most connected to the L.G.B.T.Q. community when she marches down Fifth Avenue with the Gay Officers Action League during New York’s annual Pride celebration. She calls the decision to ban the participation of uniformed police officers "devastating." “Being banished for celebrating a part of my identity is not easy for me,” Ms. Arboleda said. “Instead of being embraced, they’re throwing me back in the closet.”
We are in this world together - and we are all different, in lots of different ways. I am pretty convinced that our future prosperity and survival is going to be closely tied to how successful we can be in overcoming our differences and celebrating our diversity.
With due respect to the arguments of Roxane Gay, I think I'm with The Times on this one!
Image Credit:
https://www.nytimes.com/2021/05/18/opinion/nyc-pride-police-parade.html