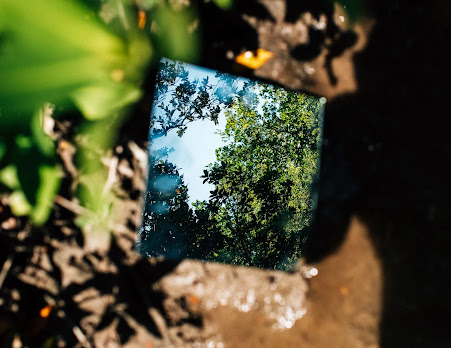 In a lovely, pre-Earth Day column, published in The New York Times on April 19, 2021, Margaret Renkl sought to remind us of a basic truth:
We Were Born To Be Wild
Renkl is the author of “Late Migrations: A Natural History of Love and Loss” (Milkweed Editions, 2019) and “Graceland, at Last: Notes on Hope and Heartache From the American South” (Milkweed Editions, 2021). Since 2017, she has been a contributing Opinion writer for The Times, where her essays appear each Monday. A graduate of Auburn University and the University of South Carolina, Renkl lives in Nashville.
My thanks to my friend Derede Arthur for alerting me to Renkl's "We Were Born To Be Wild" column. As I read her column, I was most struck by the following observation:

Nature is all around us ... and I’m not talking about just the songbirds and the cottontail rabbits in any suburban neighborhood. I’m talking about the coyote holed up in a bathroom at Nashville’s downtown convention center; the red-tailed hawks nesting in Manhattan; the raccoon climbing a skyscraper in St. Paul, Minn.; the black bear lounging in a Gatlinburg, Tenn., hot tub; the eastern box turtle knocking on my friend Mary Laura Philpott’s front door.

These encounters remind us that we are surrounded by creatures as unique in their own ways as we are in ours. And our delight in their antics tells us something about ourselves, too. We may believe we are insulated from the natural world by our structures and our vehicles and our poisons, but we are animals all the same.

Thursday is Earth Day, and even if you can’t observe it by planting trees or pulling trash out of nearby streams, this week is a good time to remember that it’s never too late to become a naturalist. And the first step is simply waking up to our own need for the very world we have tried to shut out so completely.

For we belong to one another — to the house finches and the climbing raccoons and the door-knocking turtles and the bathing bears. Recognizing that kinship will do more than keep our fellow creatures safer. It will also keep us safer, and make us happier, too (emphasis added).

I completely agree with Renkl that we are "missing out" when we essentially turn our backs on the world of nature, into which we were born, and upon which we are ultimately dependent. We would be "happier" were we all to become "naturalists," as Renkl suggests we should. I am not certain, however, that it is "never too late."
Our inattention to the world of the birds and the bugs is an inattention to the natural world that makes our own lives (and our own human world) possible. Our failure to defer to and defend the world upon which we ultimately depend is a "problem" that we have not yet sufficiently addressed. This is a problem that cannot be ignored indefinitely.
Let's not push out luck, and put that "it's never too late" statement to the test.
Image Credit:
https://www.nytimes.com/2021/04/19/opinion/earth-day-nature-environment.html