#127 / Some Free Political Advice For Democrats 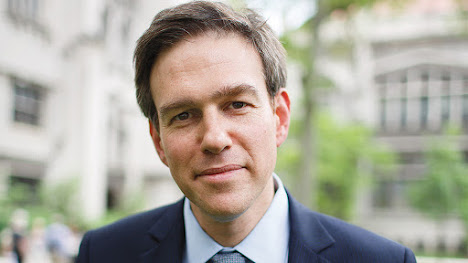 Bret Stephens, pictured, writes opinion columns for The New York Times. According to Wikipedia, Stephens is known for his "neoconservative foreign policy opinions and for his contrarian stance on the scientific consensus on climate change." Stephens is not the kind of a guy, in other words, from whom I would generally want to take advice. Nonetheless, on April 13, 2021, in a column headlined, "Liberals for Ron DeSantis," Stephens does offer some observations that I think should be taken seriously.
DeSantis is the Governor of Florida, and is considered to be a likely Republican Party candidate for president in 2024. DeSantis may even have more appeal to the Republican "base" than Donald J. Trump, at this stage, at least as a "Florida Politics" website sees it. In anticipation of such a possible DeSantis presidential campaign, the "mainstream media" is attempting to cast shade on DeSantis - at least that is what Stephens claims. In his column, Stephens is arguing that these efforts are actually having the opposite effect:

For as long as I’ve been politically sentient, I’ve marveled at the mainstream media’s talent for giving Republican politicians a boost — always unwittingly.

Stephens believes that it is a general rule that liberal-leaning media go out of their way to put conservative political candidates in the worst possible light - and that they are willing to distort the truth to do that. Frankly, it is my observation that conservative-leaning media do exactly that thing with respect to liberal or progressive political candidates, but maybe the "turn about is fair play" approach is not, actually, the best way to do politics. That is really Stephens' point.
Stephens gives as an example in his column a 60 Minutes interview with DeSantis that Stephens says was "edited to make the governor appear dismissive and nonresponsive" to the allegations of reporter Sharyn Alfonsi. I haven't watched the interview, but I did look up what Politifact had to say about it.
Wikipedia tells us that "Politifact is an American nonprofit project operated by the Poynter Institute in St. Petersburg, Florida, with offices there and in Washington, D.C. Politifact began in 2007 as a project of the Tampa Bay Times (then the St. Petersburg Times), with reporters and editors from the newspaper and its affiliated news media partners reporting on the accuracy of statements made by elected officials, candidates, their staffs, lobbyists, interest groups and others involved in U.S. politics. The Politifact journalists evaluate original statements and publish their findings on the PolitiFact.com website, where each statement receives a "Truth-O-Meter" rating. The ratings range from "True," for statements the journalists deem to be accurate, to "Pants on Fire" (from the taunt "Liar, liar, pants on fire") for claims the journalists deem to be false or ludicrous."
With respect to the issue raised by Stephens, about the 60 Minutes interview, no "Truth-O-Meter" rating is provided, but the Politifact website does indicate that the 60 Minutes public defense of its report on DeSantis "doesn’t answer anything," and that "while it made for interesting television it didn’t make for complete truth."
In other words, Politifact is basically saying that Stephens is correct in making the criticism he included in his column.
Is Stephens also correct in his claim that distorting a political opponent's statements and positions, to make the opponent look bad, is counterproductive?
In a novel choice of words, here is how Stephens levies that charge. He says that the liberal "media gods" have "decided to anoint DeSantis with the priceless gift of liberal misunderestimation - that combination of intellectual condescension and moralistic thunder that does so much to enrage and therefore animate, conservative-leaning voters."
As I say, I definitely see this phenomenon occurring with respect to attacks on progressives by conservative media, but that doesn't make it right to retaliate! It is also probably not that effective (which is Stephens' point).
To engage in tendentious and adversarial presentations of an opponent's purported failings as a main avenue of political criticism (you can call it "misunderestimation" if you like that phrase) is almost always counterproductive. Being positive about your side, instead of negative about the other side, is almost always the better choice - particularly if the negatives being rehearsed are somewhat contrived and exaggerated. I do think Stephens is right about that.
So, liberals and progressives - and media with those political preferences - take what Stephens says as some free political advice!
Image Credit:
https://www.kentuckyliving.com/event/congregation-adath-jeshurun-hosts-speaking-event-featuring-new-york-times-columnist-bret-stephens