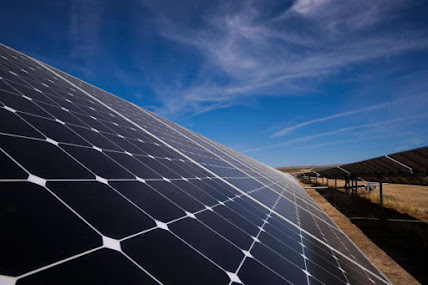 Burning fossil fuels to provide electric power is contraindicated! We need to transform the system that generates and distributes electric power to a system that is mostly based on solar, wind, and other "renewable" sources of energy. This is not a secret. It is also easier said than done! However, we currently expect the Public Utilities Commission, state government, and our electric utility companies to do what must be done to reduce and ultimately to eliminate the greenhouse gas emissions associated with the generation and distribution of electric power to our local communities. Easier said than done, indeed, but what needs to be done is pretty clear.
There is another problem with our current system of generating and distributing electric power that is not so well understood. Californians, however, are starting to figure it out.
I live in the part of the state in which Pacific Gas & Electric Company is the regulated utility that provides me and my community with electric power. And here's what I have noticed: PG&E is now telling me that the electric power provided to my entire community may be shut off, at virtually any time, and with essentially no warning, if one of two different conditions exists.
First, if the company determines that it doesn't have enough power to serve all of its customers, because of excessive systemwide demand (as when air conditioners are being used during hot spells), the company reserves the right to shut down power in whatever areas the company determines should lose power. Again, no reliable warming to those who will lose power is provided. Second, if the company determines that areas of the power supply system must be shut off to prevent power lines from starting wildfires, the company will again shut down power to whatever communities it decides should be shut down - and again with little, if any warning.
As far as I know, there is not any real "plan" for how to deal with these problems - which problems are almost certainly going to become ever more frequent, as global warming continues. I was delighted to learn, thus, in a recent article in the San Francisco Chronicle, that the little town of Gonzales, in southern Monterey County, will soon have achieved community self-sufficiency with respect to the electric power that the community needs. Joe Mathews reports as follows:

If California is lucky, our energy future could look like a small town in the rural Salinas Valley....

The town in question is Gonzales, the California municipal version of the “Little Engine That Could.” Its small, working-class population of just 9,000, many of them farmworkers, has ingeniously solved tricky local government problems, from universal broadband to health care access, and from economic planning to child development.

Now Gonzales is tackling one of our state’s most stubborn challenges: how to develop local sources of cleaner, cheaper and more reliable power as our state’s aging energy grid falters.

Tiny Gonzales’ solution? Creating the largest multi-customer microgrid in California. In essence, Gonzales is building its own electricity island among the vegetable fields of the Central Coast to guarantee uninterrupted power, from mostly renewable sources, for the agricultural and industrial businesses that provide the tax base to support its ambitious local programs.

We do need a statewide plan to deal with the unreliable power problem - as well as the problem of finding out how best to transition our power system to renewable power sources. I think Gonzales provides a good model.
Instead of a private utility being in charge of the system, we need to make our power system responsive to democratically-elected public agencies, at both the state and local level. Then, we need to make our statewide system a system that is based on local agencies that both generate and distribute power, and that are linked to provide backup and assistance to other communities as needed.
So far, the State of California is letting PG&E and the other large electric utility companies run the system.
Time for a change!
Image Credit:
https://www.sfchronicle.com/opinion/article/Electric-leadership-in-small-California-town-15944779.php