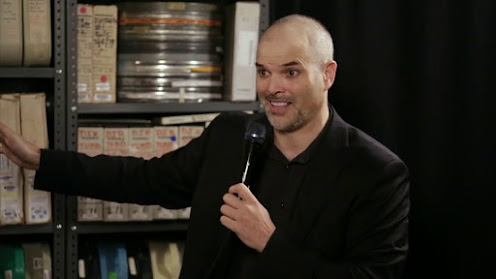 Matt Taibbi, pictured above, was once a writer for Rolling Stone. He now publishes a by-subscription newsletter on Substack. His newsletter is denominated TK News.
One of Taibbi's recent pieces really got to me. I have included it, in its entirety, below. Taibbi recounts how decent, working men and women were ripped off by those who run our financial system (and our government), and his descriptions made me heartsick.
The kind of politics we have experienced over the past four years, the "Trump Years," came directly out of the economic meltdown that occurred in 2008, and our government's unwillingness to provide effective help those who fell victim to the "financial sector."
We had better not let it happen again (and yet Taibbi suggests that this is just what's happening).
Taibbi's newsletter reminded me of a Bob Dylan lyric from Dylan's earliest album, with Dylan's very pertinent observation found in the next to the last verse of "Talkin' New York."

Now, a very great man once said
That some people rob you with a fountain pen
It didn’t take too long to find out
Just what he was talkin’ about

In Response to "New York," Re: GameStop
The Big Apple mag takes a shot at purveyors of “balefully misguided progressive discourse,” i.e. me and a few others who cheered the GameStop rally. A note in reply:
Eleven years ago I did a story for Rolling Stone about a foreclosure court in Jacksonville, Florida. After the 2008 crash, banks were kicking people out of their homes at such a furious pace that states couldn’t keep up. In Florida, an old judge was pulled out of retirement to preside over a special high-speed “rocket docket” court. He sat at the head of a small conference table in a cramped room, and I watched as he rubber-stamped stacks of foreclosures, sending a queue of bewildered homeowners on the street — one every few minutes, on average.
The people lining up to surrender their homes were middle- and formerly middle-class Americans, who’d managed to scratch out enough to buy a home at one point, but were certainly not rich. One worked at a pool-cleaning company, another was a waitress, a third was a school administrator, and so on. They were white, African-American, Latino, Asian, and they expressed a range of emotions, from shock to shame to anger.
One woman was bewildered to learn that she couldn’t learn, for sure, the identity of the note-holder on her home. The hack lawyer filing for the banks that day — a bumbling character who entered court with two hands around a stack of foreclosure petitions that accordioned like Dagwood’s sandwich — claimed to be suing her on behalf of Wells Fargo. But the documents in her file claimed Wells had purchased her loan from Wachovia in May of 2010, two years after Wachovia went out of business, and three months after Wells originally sued her, a logical impossibility.
The woman seemed too confused to be angry. Mainly, she couldn’t believe what was happening. “The land has been in my family for four generations,” she said. “I don’t want to be the one to lose it.” She got a temporary reprieve that day, but a hundred others like her did not.
About a year after that, at Zuccotti Park in New York, it struck me that if Occupy Wall Street could attract the people from places like that Rocket Docket in Jacksonville, it might have overrun the country. At the time, the emerging criticism of Wall Street that was coming from younger, urban, college-educated activists had not yet lined up with the gigantic reservoir of rage that was out there among the millions who’d lost homes, jobs, pensions, etc.
Not only were many of those people who’d been foreclosed upon or laid off or forced to watch their 401Ks lose half their value still in emotional shock, but the underlying corruption was not exactly easy for them to see. Propaganda blasted out on every channel, to the effect that it was your own fault if you took on an adjustable-rate mortgage that went sideways, or bought too big of a house. People above all feel shame when they can’t pay their debts, and many took it to heart when pundits said the crash was caused by people buying houses they couldn’t afford.
Those criticisms often came out as racial politics, as conservative media figures hammered the theme of the “water drinkers” who crashed the economy at the expense of the “water carriers.” Listening to these takes, resentment in some neighborhoods grew toward the family down the street who’d been foreclosed upon, leaving a boarded-up eyesore on the block and collapsing property values for those left. The Tea Party movement, launched by a rant on CNBC against a proposed bailout for minority homeowners in particular, steered public anger away from Wall Street and toward the “bad behavior” of the “losers” down the street.
“How many of you people want to pay your neighbor’s mortgage, that has an extra bathroom, and can’t pay their bills?” screeched Santelli, to “America,” which was actually a group of booing traders on the Chicago Board of Exchange: