#40 / Democracy Is Not Self-Executing 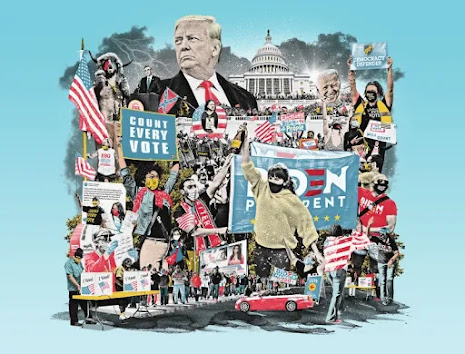 Time has published a long, detailed article on "The Secret History of the Shadow Campaign That Saved the 2020 Election." It is an extraordinary story, and it is well worth reading.
As Time tells it, the assault on the U.S. Capitol, on January 6th, was simply the final action in a long, subsurface effort by our former president to subvert the 2020 election and to guarantee his victory. On the other side - and there was another side, as the Time article documents - a group of persons concerned about the possible, or even probable, success of Trump's anti-democratic efforts took action to insure a fair and democratic election contest.
This is, as I said, an extraordinary and fascinating story, and it makes clear that engagement and involvement in all aspects of our political and governmental system is absolutely vital, if we wish to maintain our system of democratic self-government. I recommend the article, with the "bottom line" being summed up in this excerpted paragraph:

“Every attempt to interfere with the proper outcome of the election was defeated,” says Ian Bassin, co-founder of Protect Democracy, a nonpartisan rule-of-law advocacy group. “But it’s massively important for the country to understand that it didn’t happen accidentally. The system didn’t work magically. Democracy is not self-executing (emphasis added).”

I did not come away from the article much comforted. Happy with the outcome this time around, as the article describes it, I don't believe we can properly assume that some "shadow" group of well-meaning persons, unknown to us, will always be there to save democracy.
NBC News reported on February 5th that "Republicans advance more than 100 bills that would restrict voting in wake of Trump's defeat."

State lawmakers are considering more than 100 laws that would make it harder to vote, according to an analysis conducted by the Brennan Center for Justice at New York University School of Law. This number represents almost triple the number of similarly restrictive bills under consideration this time last year, according to the analysis.

These bills, in the works in 28 states, primarily seek to limit mail-in voting access, add voter ID requirements and make it harder to get on or stay on the voter rolls, according to the Brennan Center. There are nearly 2,000 bills moving through state legislatures aimed at addressing election-related issues overall, according to the National Conference of State Legislatures.

It is now time for many more of us to organize, not only to defeat efforts to roll back voter rights around the nation, but to provide strong and secure guarantees that will withstand what are clearly going to be continuing efforts to undermine our democratic system.
That article in Time definitely gets it right: Democracy is not self-executing!
Image Credit:
https://time.com/5936036/secret-2020-election-campaign/