#35 / The Problem With Congress 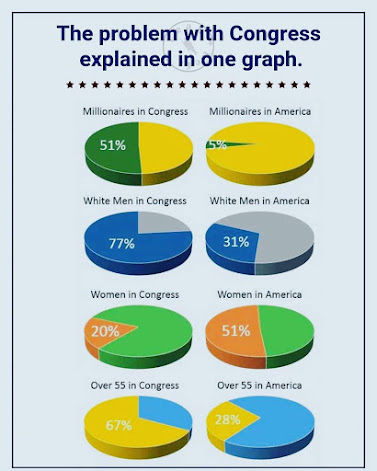 Not so long ago, a posted comment by a Facebook Friend introduced me to the chart above. As I remember it, my reaction to this chart, as I passed it along to my own Facebook Friends, was something along these lines: "Doesn't that just capture it!"
And I think it really does. It is pretty clear to me - and probably to almost everyone - that our elected representatives in Congress are not, in fact, actually "representative" of the people whom they are supposed to be representing. That is the essential message of the chart, the way I read it, and I do think that this is pretty much the way it is.
In doing a little investigation, I did find that the accuracy of the chart has been challenged, particularly with reference to what percentage of the Members of Congress are "millionaires." So how does that chart at the top of this blog posting conform to the truth?

THE ANSWER:
A few of the numbers aren’t far off, but none of them accurately reflects the data for the 116th Congress that is currently in session [actually, the 116th Congress just ended in January].
The numbers for Congressional members who are millionaires and the percentage of white men in Congress have both decreased.
The percentage of women in Congress and of lawmakers older than 55 have both gone up.

The numbers "aren't far off," but they're not right on target. But is the essential message correct? Is it true that the people who serve as our "representatives" are not, in fact, very "representative" of the public? Again, I do think that's largely true.
So, what are we supposed to think about that - granting that the chart is a bit off on the detailed numbers, but is generally correct about the basic situation?
First, of course, it isn't true that a Member of Congress can only be a good representative of his or her constituents if the Member is similar to them in the various categories examined in the chart.
Second, if our representatives aren't, actually, "representative" of the voters for whom they act, the solution lies with the voters.
It is generally true that "millionaire" Members of Congress are a lot better off, economically, than the people whom they represent. But they were elected by those voters. Just assuming that the chart is accurate about millionaires (which it probably isn't, in terms of the exact numbers), if ninety-five percent of the public are NOT millionaires, those who aren't millionaires certainly outnumber the five percent who are, and if we non-millionaire types care enough to get organized, we could, at least theoretically, elect more people who are in our own income bracket.
The "problem" with Congress identified in the chart (which I really do agree is a genuine problem) can only be solved by those who are in the majority. The majority will have to decide that it wants a Congress that "looks more like America," and then take over the Congress and "make it so."
I know that this is easier said than done. That kind of change will have to happen one district at a time, and money makes all things easier - including getting elected - for those who have it. Being white, instead of Black, also makes things easier. Being a man, instead of a woman, also makes things easier.
All that conceded, it is ultimately votes that count, and the recent election results in Georgia, and the story of Stacey Abrams and her work to change the politics in Georgia, proves that truly significant changes can in fact be made.
But those changes will come only if we get involved, ourselves. The "problem" with Congress (it's a real problem) is our problem, and we are going to have to reallocate our time and energy, and get engaged in politics, if we want to solve it.
Image Credit:
https://www.wusa9.com/article/news/verify/verify-does-a-viral-graphic-show-the-problem-with-congress/507-ae1c3ce4-b8ee-4406-8ede-0f6af1111f1c