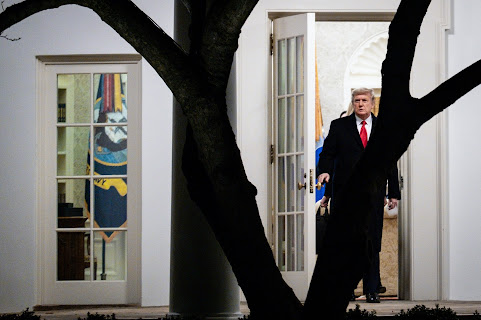 President Trump’s relentless effort to overturn the result of the election that he lost has become the most serious stress test of American democracy in generations, one led not by outside revolutionaries intent on bringing down the system but by the very leader charged with defending it.

The statement above is taken from a New York Times' story, yesterday, "An Insurgency From Inside the Oval Office." Today is the day we will find out whether or not our democracy has passed the "stress test" imposed upon it by our current president. It is today that Congress will receive its report from the Electoral College and then take action.
As I write this, I must admit to being just a little bit nervous. I guess you could say that I have the pre-test jitters!
Peter Baker, The Times' Chief White House correspondent, wrote the article that I have linked above. It's worth reading, if you can penetrate the paywall. In his article, Baker referenced a best-selling book, How Democracies Die, and he said something that bears repeating:

When Steven Levitsky and Daniel Ziblatt published their best-selling book, “How Democracies Die,” in 2018, warning that even the United States could slide into autocracy, they faced blowback from some who thought they were overstating the case. “We were criticized by some as alarmist,” Mr. Ziblatt, a government professor at Harvard University, said on Monday. “It turns out we weren’t alarmist enough.” Mr. Ziblatt said a healthy democracy requires at least two political parties that know how to compete and lose.

I think that Ziblatt makes a good point. In the stress test taking place today, the persistence of democratic self-government in the United States of America is going to depend, as it always does, on whether or not our political parties know how to lose.
Today, specifically, we are going to find out if the Republican Party does.
Image Credit:
https://www.nytimes.com/2021/01/04/us/politics/trump-white-house.html