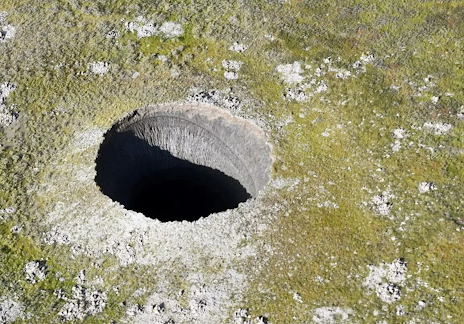 The crater that is pictured above, in a photo taken in the Siberian Arctic, appeared suddenly and explosively. The picture comes from an article in an online news magazine, BBC Future, which calls the crater a "mystery." BBC is the short form name for the British Broadcasting Corporation, and it heralds BBC Future as "a home for the insatiably curious."

In a complex, fast-paced world of soundbites, knee-jerk opinions and information overload, BBC Future provides something different: a home for slowing down, delving deep and shifting perspectives.

The story from which I took the image is titled, "The mystery of Siberia’s exploding craters." Does BBC Future solve the case? Is the mystery revealed?
Pretty much, and it's not really much of a "mystery," either, at least not in my opinion. In the Arctic, methane gas is trapped in soil, or ice, buried and essentially frozen. As the world heats up, the gas is being released, and when an expanding pocket of gas is capped and trapped by soil, rocks, and ice, pressing down on it from above, something, eventually, is going to "blow."
What the article finally gets around to mentioning, near the very end, is something that I find a lot more disturbing than the fact that exploding craters might be turning up, every so often, in a pretty sparsely populated part of the planet:

As a potent greenhouse gas, this methane leaking out of permafrost has the potential to accelerate global warming and so drive even more melting.

We are all well aware, I trust, that our continued emission of greenhouse gases (mostly carbon dioxide) is the major cause of the global warming that is putting life on this planet in peril. Human beings are definitely on the list of the species endangered by human-caused global warming.

Methane is about eighty-six times more powerful as a greenhouse gas than carbon dioxide (albeit that carbon dioxide is more persistent in the atmosphere than methane). What if, as appears is happening in the Siberian Arctic, the heating up of the Earth releases large volumes of methane? This is a kind of "worst case" scenario. Huge amounts of methane are trapped in the Arctic. If released in large volumes, as from the so-called Methyl Hydrates currently trapped in Arctic waters, an extremely rapid and catastrophic warming could occur.

You can find out more about this possibility from a climate science website maintained by Yale University, which downplays the danger:

The blogosphere for years has been abuzz ... with information – and, equally importantly, misinformation – about the near-term risks posed by uncontrollable and potentially catastrophic releases of large Arctic deposits of methane hydrates, ice-like substances holding a powerful greenhouse gas.

Watch the videos linked in that Yale article, if you'd like, and see if you feel ok about the potential dangers of methyl hydrates, and other sources of methane now trapped, but which could be released, as in the case of these Siberian "exploding craters."

Personally, I'm worried. Human beings often underestimate significant dangers because they just don't want to admit that catastrophe is a very real possibility, and that they need to make some really big changes to prevent that possible catastrophe from happening. We are already there, where global warming is concerned, and I think that planning for the "worst case" is almost always the best way to plan, because that is usually a "no regrets" methodology.

In short, we ought to be doing EVERYTHING POSSIBLE to eliminate greenhouse gas emissions. No more gas-fueled cars. Solar everywhere. Etc. Failure to take seriously the danger posed by the release of frozen, trapped methane, as the world heats up, means our optimistic ideas that it is not going to be so bad can explode in our faces, and what is going to be cratered, if that does occur, is our human civilization.

If we don't act now, to prevent a "worst case" possibility, and if that "worst case" does come to pass, the only "mystery" will be Why The Heck Didn't We Act When We Still Could?