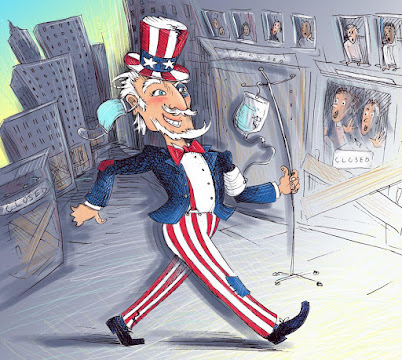 Peggy Noonan (a former speechwriter for Ronald Reagan) writes columns for The Wall Street Journal. For the paper's weekend edition, dated December 19 - 20, 2020, Noonan's column was titled, "The Monday When America Came Back." The illustration above accompanied Noonan's column, responding, graphically, to her opening lines:

Who’s that battered old man making his way down shuttered streets, facemask hanging from an ear, IV pole dragging at his side. A poignant figure. Didn’t he used to be someone?
But wait, look. He’s not walking, he’s marching. Like he’s got his old strut back. As if he just remembered who he is.
That was the picture that came to mind on Monday. We were like America of old. And I’m not sure we’re fully seeing it. But on that day our Constitution did what it was built to do, prevail. And our scientific genius and spirit of invention asserted themselves as national features that still endure.
So here’s to you, Dec. 14, 2020. You provided a very good ending to a very bad year.
On that day the winner of the 2020 election was formally declared president-elect by the Electoral College. This would normally be a formality, but this year it had—let’s call it deeper than usual resonance. Presidential electors met and voted throughout the day in all 50 states and the District of Columbia. The vote was 306-232. It was done as in the past, in an orderly manner without great incident.
For all the postelection threats and accusations the system held. It turns out some words in a 4,543-word document that was ratified 232 years ago, on June 21, 1788, still had the last say.

Naturally, like Noonan, I was delighted that our current president and his supporters have not been able to derail American democracy after the recent election (at least they haven't been able to do that so far). In writing about that, though, I might have been just a little less celebratory than Noonan. There are some things to celebrate, of course, about America post December 14th, but there are lots of huge problems, too, both shameful and concerning.
These problems - existing and looming - make the celebratory tone of Noonan's column just a bit off-key, at least to me. "American Celebratory," however, is what Noonan does best. She is not named as the person who came up with that "Morning in America" line that helped define Ronald Reagan as a positive and optimistic force in American politics - and helped get him elected President - but that is definitely the key in which Noonan likes to compose.
After heralding the fact that our system of electing a president actually ended up with the Electoral College voting for the person whom most of the voters wanted to be president, and for whom they actually voted, Noonan then heralded the rapid development of the Covid-19 vaccine that has just been rolled out. The celebratory tone (of course) continues:

The second big thing that happened Monday: the human and scientific miracle of the first Covid-19 vaccines began that day to arrive at American medical centers and be administered to health-care professionals. You saw the pictures of nurses getting the shots from doctors, and health-care workers in Boston dancing in the hospital parking lot. It was beautiful. Shipments of the Pfizer /BioNTech vaccine carried about three million doses, and they arrived—this is so American—by UPS and FedEx. I don’t know why that pleases me so much, but it does. I keep wondering who signed for the delivery.
All this was done against the odds, against scientific history—no vaccine had ever been developed and produced so quickly—and by a country battered by illness. People slept in their offices to get this thing done. The ability of drug companies to shift focus, reorient research and development, race for an answer—all this is a triumph of medical science, of manufacture and distribution. They retrofitted factories to ensure manufacturing capacity even before the Food and Drug Administration approved the inoculations. The sheer scientific brain power involved, the level of organization demanded, all came at record speed. Billions came from the U.S. government; big profits will be made. I don’t care. This was a kind of greatness. We all decry Big Pharma, and high prices, and opioids. We like to hate them. I like to hate them. But look what they did.
Our country got pummeled by an illness, and we did this. Really there must be more to us than we think (emphasis added).

It was the "we did this" language that got to me! It reminded me of a cartoon that I really liked, shown below: 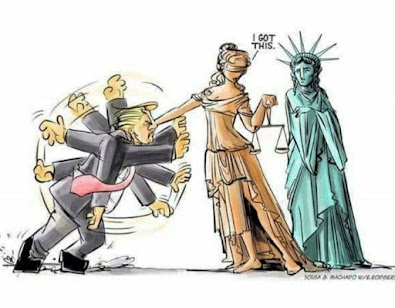 I don't think, ever, we should be overly celebratory - as individuals, or as we identify with our nation - but I do like that, "we did this" idea. I like the idea that "we got this."
In other words, what I liked most about the Noonan column was her reminder that we actually can rise to the occasion and muster our spirit and our resources to meet the challenges that face us, challenges that only seem insuperable.
"We did this" means that we can do this. And so we must!
Global warming? Racial and economic justice? Those are just a couple of the things that are on my mind!
Image Credits:
(1) - https://www.wsj.com/articles/the-monday-when-america-came-back-11608247644
(2) - https://www.buzzfeednews.com/article/davidmack/i-got-this