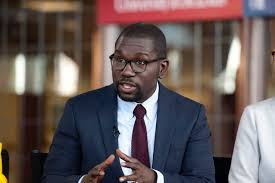 Jamelle Bouie, pictured above, writes for The New York Times. His column on November 18, 2020, asks this question: "Why did Donald J. Trump do as well as he did in the presidential election?" Time has passed since election day, but we have not forgotten, have we, how shocked many were when Trump did much better than expected? Speculation about why he did so well was immediate. On November 4th, CNN made that topic a major subject of inquiry.
Bouie reviews, and then dismisses, a number of the explanations circulating among the pundits, including the hypothesis that new "coalitions" are forming up under the Republican Party banner. Bouie has a different, and very simple, answer:

Even as we throw cold water on these narratives — at least until there’s more evidence to back them up — we’re still left with the unanswered question of how Trump performed as well as he did. He may not have transformed the Republican coalition, but he held onto much of his 2016 support and even enlarged it, if not in percentage terms then in absolute ones. Democrats who thought he would be swamped by high turnout were wrong; not only did he benefit, but his ability to turn nonvoters into voters is what likely kept him in the game.
At the risk of committing the same sin as other observers and getting ahead of the data, I want to propose an alternative explanation for the election results, one that accounts for the president’s relative improvement as well as that of the entire Republican Party.
It’s the money, stupid.

Bouie, in other words, says Trump got political credit for the economic support provided by the CARES Act:

At the end of March, President Trump signed the Cares Act, which distributed more than half a trillion dollars in direct aid to more than 150 million Americans, from stimulus checks ($1,200 per adult and $500 per child for households below a certain income threshold) to $600 per week in additional unemployment benefits. These programs were not perfect — the supplement unemployment insurance, in particular, depended on ramshackle state systems, forcing many applicants to wait weeks or even months before they received assistance — but they made an impact regardless. Personal income went up and poverty went down, even as the United States reported its steepest ever quarterly drop in economic output.

Of course, it was the Democratic Party, not the Republican Party, that was mainly responsible for this economic relief measure, but it was the President who signed the bill (and the checks). What does this tell us? Most people aren't paying very close attention to who is doing what, and how the government actually works, but when the government does something right, something that genuinely helps the people, those responsible (or who are seen to be responsible) will be rewarded. Zeynep Tufekci, by the way, agrees with Bouie about why Donald Trump did so well. She is a very smart social observer, so that is a pretty good sign that he is onto something!
Since the new administration will have an opportunity not only to deal with the economic dislocations caused by Covid-19, but will also have an opportunity to address the massive income and wealth inequality that so profoundly affects our politics, economy, and society, Bouie's lesson is a lesson worth remembering: It's the money, stupid!
If we are all in this together (and we are), let's be sure those who need money start getting what they need. Looks like that's a short route to political success.
Image Credit:
https://www.nytco.com/press/jamelle-bouie-joins-the-new-york-times-opinion-pages-as-columnist/