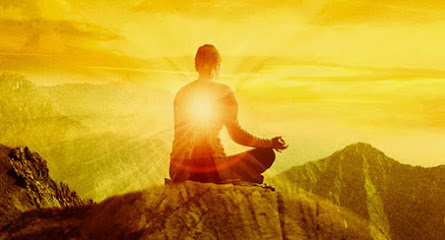 Zen Buddhism is full of stories about practitioners staring death in the face in order to cut through their mental habits and force a direct confrontation with the fundamental matter. Monks doing zazen on a cliff’s edge to keep themselves alert, rōshis telling frustrated students to kill themselves if they cannot achieve satori by next sunrise, students taking death vows if they fail to awaken within a given period of time, etc.

In Helen Tworkov’s Zen in America, for example, we are told of “the monk who sat with a stick of incense in one hand and a knife in the other and vowed to kill himself if he didn’t get enlightened by the time the incense burned out. As always—at least in the stories that are passed down—he got it just in time, pushed to the breaking point by the pain of the burning stub.”

The quote above comes from Caitlin Johnstone, who suggests that humanity has "trolled itself into an Awaken-Or-Die situation." She makes a good point!
"We see humanity," Johnstone says, "as a collective in its own existential crisis as the ecosystem in which we evolved moves toward collapse, nuclear-armed nations move ever closer to direct confrontation, and governments get more and more authoritarian while democracy and transparency continue to erode."
I do think Johnstone is correct in her diagnosis. Our human situation is dire, and a lot of what Johnstone says is not very encouraging:

We are hurtling in the direction of dystopia and armageddon, and the powerful elites in the driver’s seat have made it abundantly clear that they have no intention of swerving from this trajectory. We cannot use democracy to turn this ship away from the iceberg because the “democracy” we’ve been given is a fake child’s steering wheel given to a toddler to play with so they can pretend they’re driving. Even direct revolutionary action is completely barred from us as long as we are being successfully propagandized into consenting to the status quo by the manipulations of mainstream and social media corporations.

What to do about it, then? Johnstone's advice is that we must either "Awaken or Die." She thinks this means that we must have "a mass-scale awakening," a "mass-scale people's movement," and that you "can't have a mass-scale people's movement without a mass-scale awakening from humanity's unwholesome relationship with thought."
What on earth does that mean? What does it mean to say that we have an "unwholesome relationship with thought?" My favorite Nobel Laureate, Bob Dylan, addresses this question, and he puts it this way:

Since we are all individuals, we have a fundamental and individual choice to make. We can either wait around for someone else to create that "mass awakening" we all need, or we can follow the Michael Jackson/Bob Dylan prescription and start looking at that Man in the Mirror.
I am suggesting the latter, and here are a few little ways we might want to start "cleaning up" our individual thoughts, so they are less "unwholesome," and so that they might help initiate that "mass-scale awakening" that we need so badly. Let's make ourselves a different set of rules:

Together we must change the world. We can begin by addressing Caitlin Johnstone's short list - the global warming crisis, the growing danger of nuclear war, and the seeming near-collapse of democratic self-government. Let's hit those, and then move on from there. Not only do we have to do it, we have to do it now.

Time is short. That incense stub is burning our fingers. Caitlin Johnstone got it right: