#311 / Our Deepest Problems Will Remain 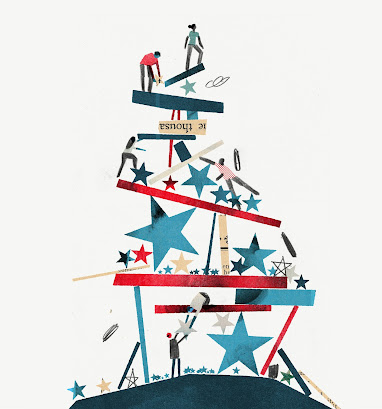 Yuval Levin advises us, in his New York Times column on November 4, 2020, published the day after our presidential election, that "No President Can Solve Our Deepest Problems." That is how Levin's column was titled in the print edition of the paper. This print edition title was translated into this statement in the online edition: "Either Trump or Biden Will Win. But Our Deepest Problems Will Remain."
Ain't that the truth! All those problems! We've still got 'em!
Levin is a "conservative." He is the director of social, cultural and constitutional studies at the American Enterprise Institute and is the editor of National Affairs. He came to The Times' opinion page as a guest commentator, and the main focus of his column was how to move ahead in a time of intense social and political polarization. Ross Douthat, a Times' regular, who is also a "conservative," pretty much filed a concurring opinion. In Douthat's Novemer 4, 2020 column, Douthat asks, "Will the 2020 Election Be Decisive?" Douthat's answer? NO!
Levin says that "for politics to function, we need to act at the local, personal level." Douthat says that:

From a systemic perspective, from the point of view of America’s potential governability, even those of us who would oppose much about a Biden presidency could draw something hopeful from the seeming possibility — as of 24 hours ago — of a landslide Democratic win. That would mean that the system can still deliver clear decisions, even if only for one cycle, and it would create incentives for whatever follows Trump in the Republican Party to seek a similarly decisive victory in its turn.

But that possibility has evaporated as of this writing, taking what remains of the expert class’s credibility with it. Instead at the moment we seem headed toward the indecision of another too-close-to-call and potentially litigated endgame, with razor-thin margins no matter which man wins. Which implies that even under what seemed like favorable conditions for a decisive outcome, the evolving ways we’re polarized — by age, geography, sex, class and faith — are still the more powerful forces, dragging us ever back toward stalemate.

It’s one more sign, as if we needed more, that our system’s method of uniting power with legitimacy is slowly losing both (emphasis added).

We have just experienced four years of an extremely polarized and polarizing politics - though to be honest, it is clear that the polarization of our politics began long before the advent of Donald J. Trump. Another four years of such polarization does, as both Levin and Douthat suggest, put us in significant peril. That peril is not just "political," either. There are real perils that faces us if we cannot find some way to address the consequences of the Covid-19 pandemic, massive economic inequality, and the failure of our nation to achieve racial justice. Plus, we must stop our headlong race towards a global environmental disaster, caused by our continuing refusal to deal with global warming.
I liked Levin's prescription: personal political action at the local level.
That is where politics always begins! That means you and me!
We simply cannot afford four more years of contracting out our political decision-making to those running our national political parties, who have really made a mess of it, on both sides of our political divide.
Image Credit:
https://www.nytimes.com/2020/11/03/opinion/2020-election.html