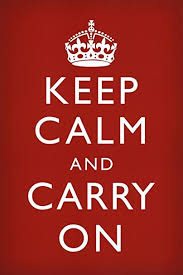 Wikipedia tells us that this "Keep Calm And Carry On" poster was produced by the British government in 1939 in preparation for World War II:

The poster was intended to raise the morale of the British public, threatened with widely predicted mass air attacks on major cities. Although 2.45 million copies were printed, and the Blitz did in fact take place, the poster was only rarely publicly displayed and was little known until a copy was rediscovered in 2000 at Barter Books, a bookshop in Alnwick. It has since been re-issued by a number of private companies, and has been used as the decorative theme for a range of products.

I am wondering if it might not be a good idea to reissue this poster now, in large numbers, so it might get widely distributed. In the run-up to the election, I received what I consider to be rather hysterical messages from both sides of the political spectrum.
Those coming from the right-wing were by far the most extreme, predicting out and out civil war, but those on the progressive side of our contemporary politics also used what I would have to say is inflamatory and exaggerated language. Some commentators are taking the "Civil War" idea quite seriously, including Matthew Gault, whose article in Vice is entitled, "Is the U.S. Already in a New Civil War?" The following email, which recently appeared in my inbox, gives some credence to the idea that some people seem to think that there is a Civil War underway right now: 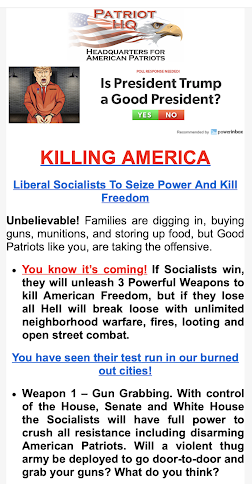 Tom Engelhardt, who publishes a political newsletter called Tom Dispatch - and who is quite progrssive, to use that word - recently ran an article by Rajan Menon, who is the Anne and Bernard Spitzer Professor of International Relations at the Powell School, City College of New York. Menon also serves as a Senior Research Fellow at Columbia University’s Saltzman Institute of War and Peace Studies. This is from Englehardt's introduction to the Menon article, which is titled, "So Trump Loses: What Happens Then?"

Something else has long been on my mind: not what Donald Trump could try to stop from happening, but what he could actually do between November 3rd and January 20, 2021. This is, after all, the head of an administration that has tried to roll back nearly 100 environmental regulations, turning this country into a potential hell on earth. His people, now undoubtedly fearing defeat, are already moving fast to make sure that the U.S. will, in the worst sense imaginable, remain Donald Trump’s land until that hell freezes over.

I consider Englehardt to be a reliable commentator on the issues of our time, and I absolutely agree that the Trump Administration's efforts to sabotage of our system of environmental protections have been shameful and destructive. Here is a link to an article that discusses the administration's last-minute efforts to push through an oil exploration plan for the Arctic National Wildlife Refuge - an example of exactly what Saltzman is talking about. I find what the administration is doing very shameful indeed, and destructive, and distressing. I have no doubt that the president will continue to try, as long as he is in office, to weaken or eliminate as many environmental laws and regulations as he can. And that is only one of the areas in which our current president is sprinting to do damage while he still wields the power of the presidency.
What the current administration is doing to undermine environmental protection is bad. It is even "really bad." It is "horrible." However, "Hell on Earth" is not the likely result of what Trump's anti-environmental efforts will achieve. What positive benefit does such extreme language bring? As Lance Morrow writes in The Wall Street Journal, we are living in an "amazing, horrifying age of exaggeration." As he notes, that's coming from both sides: 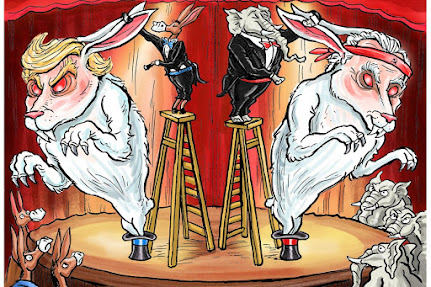 Most of us know, from personal experience, how we can "talk ourselves into a fight" that we might have avoided. "Civil War," or "coups," seem to be the kind of confrontations that some of our fellow citizens are spoiling for - and I do mean from both sides of the political spectrum. First-time gun buyers, just ordinary Americans, many on the "liberal" side of our political divide, are arming up.
This is not a good sign!
Given where we are, right now, I think that Britain's World War II poster is worth a look. It seems to suggest that we might just throw away the hysteria pills, and that there is another alternative - and an alternative that really does make some sense. From whichever side of the political divide you come, I think it is worthwhile to consider this advice:
Keep Calm And Carry On!
Image Credits:
(1) - https://www.amazon.com/GB-Eye-Keep-Carry-Poster/dp/B00276KEXS
(2) - Patriot HQ - https://patriothq.org
(3) - https://www.wsj.com/articles/the-amazing-horrifying-age-of-exaggeration-11603820740