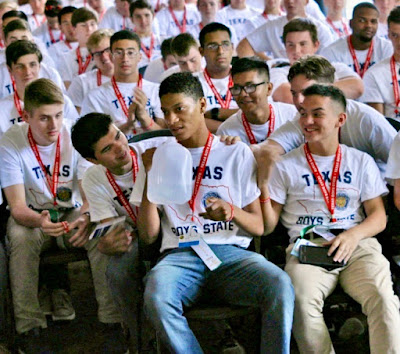 Boys State is a project of The American Legion that is supposed to help high school juniors explore and understand the mechanics of American government and politics. There is a "Girls State," too, by the way.

"Boys State," the movie, is a documentary that provides some insight into what the real "Boys State" phenomenon is all about. I haven't seen the movie, available on Apple TV, but  I have read about it. Clicking this link will take you to a review by Odie Henderson, who gives the movie three and a half stars. Clicking right here will take you to a column in The New York Times, authored by René Otero. Otero is front and center in the picture above, and he is one of the persons who is featured in the documentary. Otero identifies himself as "an activist" in his Times' essay, and the headline on his column is this: "I attended Boys State, and Survived."

Those who are reading this blog posting might well run into a paywall, if they attempt to read Otero's essay online. Here are a few samples of what he has to say:

Otero's main critique of Boys State is that it is, essentially, a high school level copy of our current electoral politics - and that these politics are racist, prejudiced, polarized, and disgusting. He says that the Boys State experience did succeed in making him want to build civic engagement into his life, but that he will do so outside the realm of electoral politics. Citing to Michelle Obama's speech at the most recent Democratic National Convention, Otero justifies his rejection of electoral politics as follows:


In her address at the Democratic National Convention this month, [Ms. Obama] echoed this sentiment: “You know that I hate politics, but you also know that I care about this nation.” She noted that “going high” and playing the game do not mean you can’t critique the system. This is where we align. Through my brand of civic engagement — marching in the streets, research, advocacy, education — I am marrying my cynicism with action.

I believe that Otero's evaluation of electoral politics is commonly shared - and for good reason. Our party-based and polarized system of electoral politics is profoundly off-putting, because it is so fundamentally flawed. To the extent that Boys State and Girls State hope to inspire young people to enlist in the current system, they do the nation a disservice. If that's the idea, then "Boys State" is not so great.

"Civic engagement," though, which means enlisting with others to change the conditions of our lives for the better, should never be treated as if it were the result only of electoral politics. That is what René Otero tells us in his New York Times' essay. The opposite is the case. As we engage in direct struggles for political, social, and economic change - what Otero calls "action" - we will ultimately and inevitably transform our electoral politics to achieve the changes that the people demand. But focus on the changes, not on electoral politics.

I think Otero is dead on right about that!