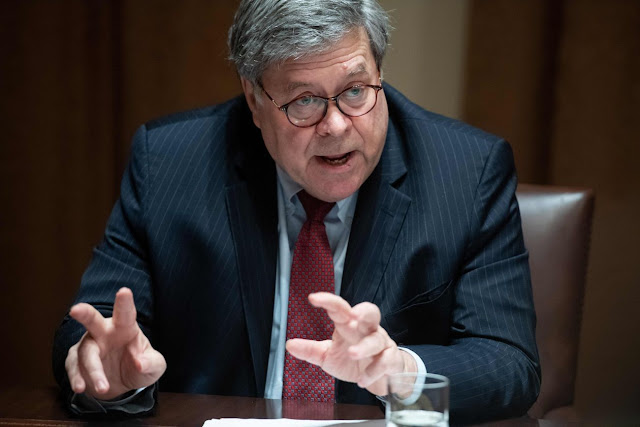 I am no fan of Bill Barr, pictured above, who is currently serving as Attorney General of the United States. Barr was appointed by our current president, and many have criticized Barr for acting more like the president's personal lawyer than as the lawyer who is supposed to represent the United States government in its entirety, as the government's top prosecutor.

On September 16, 2020, Attorney General Barr delivered a "Constitution Day" speech at Hillsdale College, generally considered to be a bastion of right wing politics. Here is how Wikipedia describes the college:

Hillsdale, a private conservative college in Hillsdale, Michigan, was founded in 1844 by abolitionists known as Free Will Baptists. It has a liberal arts curriculum that is based on the Western heritage as a product of both the Greco-Roman culture and the Judeo-Christian tradition. Hillsdale requires every student, regardless of concentration of studies, to complete a core curriculum that includes courses on the Great Books, the U.S. Constitution, biology, chemistry, and physics. Since the late 20th century, the college has been one of several in the United States that decline governmental financial support, instead depending entirely on private donations to supplement students' tuition.

Barr's speech at Hillsdale, a complete transcript of which is available by clicking that link, was roundly criticized in the media. Much of the criticism focused on Barr's claim that coronavirus stay at home orders represented something akin to slavery: “Other than slavery," Barr said, "which was a different kind of restraint, this is the greatest intrusion on civil liberties in American history.”

The comparison of health-based orders to control the pandemic to slavery was not the only part of Barr's speech that some found objectionable. Vox called the speech a "stunning hypocrisy," and noted that Barr advocated for his personal control over the prosecutorial decisions of lower-level prosecutors who are pursuing prosecutions throughout the United States. As Vox observed, Barr has been intervening to call off prosecutions that are unfavorable to the president, and in which the president's friends and associates have been accused of crimes.

The Wall Street Journal came to Barr's defense on Friday, September 18, 2020, in an editorial that claimed that "the left" has distorted Barr's speech.

For those interested, it is worthwhile to test the claims of the editorial (presented below) against the text of Barr's speech. Personally, I believe that Barr is misusing his office, and that his appeal to "principle" is, essentaially, bogus. His allegience is solely to Donald J. Trump, not to the nation. As I say, that is my belief, but if you do the reading of both the Wall Street Journal editorial and the speech, you can make up your own mind.

One statement made by Barr in his speech, and highlighted by the Wall Street Journal editorial, is worth highlighting. Barr said this:

Political accountability—politics—is what ultimately ensures our system does its work fairly and with proper recognition of the many interests and values at stake. Government power completely divorced from politics is tyranny.

I definitely agree with Barr on this point. Our system of democratic self-government operates on the basis of the following fomula:

If we think good government is independent of "politics," we are sorely mistaken. We will not have a satisfactory "rule of law," and good "government," unless we, ourselves, are engaged in the political life of the nation. That is because the laws to which we are held accountable, and the legal institutions that enforce them, or that decline to enforce them on the basis of "prosecutorial discretion," are ultimately responsible to the elected officials whom we have, ourselves, selected to execute the law. Our political choices, in other words, always come first.

If you don't like what's happening in the office of the United States' Attorney's Office, get yourself in gear to influence everyone you know - and even those you don't - to get to the ballot box on or before November 3rd!

Mr. Barr delivered a thoughtful address on how a democracy should handle the profound power of prosecution. Yet for the Washington Post, it was a “breathtaking broadside” against the “professional attorneys” in the Department of Justice. Former Attorney General Eric Holder tweeted that Mr. Barr is “dangerous” and “increasingly absurd,” and Connecticut Senator Richard Blumenthal called him a “disgrace.”

It’s worth setting straight what Mr. Barr actually said—and its vital significance for our polarized society. First Mr. Barr conveyed the awesome power of prosecutors. “Once the criminal process starts rolling,” he explained in remarks that are on the Justice website, “it is very difficult to slow it down or knock it off course.” He quoted Supreme Court Justice Robert H. Jackson, an erstwhile liberal hero, who wrote that prosecutors “strike at citizens not with mere individual strength, but with all the force of government itself.”

In a society that rests on the consent of the governed, such power should not be wielded without democratic accountability. That’s why the Constitution provides that top law-enforcement officers—U.S. Attorneys, senior officials in the Justice Department and ultimately the Attorney General—be appointed by the elected President and confirmed by the Senate. They can also be brought before Congress for questioning, censured or even impeached.

This seems like a straightforward point, but the idea of political accountability for prosecutors is now controversial. Perhaps it’s because of the leftward turn of the legal establishment, or the rise of the “Resistance lawyer” industry during the Trump Administration, or the attachment to the idea of “expert” knowledge superseding political deliberation. Whatever the reason, many progressives seem now to believe that career prosecutors ought to have free rein to pursue cases without supervision. In this view, the Attorney General and other Senate-confirmed officials should be figureheads atop an autonomous lawyerly civil service.

That’s a reversal of the Constitution’s design. It’s also based on a false premise. As Mr. Barr explained, career prosecutors should be trusted and supported, but that does not mean their decisions are free of personal or political motives. Often they take aim at targets to boost their careers. And “like any person, a prosecutor can become overly invested in a particular goal.” Far from an attack on career prosecutors, Mr. Barr recognizes human nature.

He also noted the dangerous trend of prosecutors bringing cases based on creative interpretations of statutes to punish non-criminal behavior. The Supreme Court agrees with him on this point, having overturned several convictions in recent years, such as one against a fisherman accused of violating the Sarbanes-Oxley anti-shredding law because he tossed a small grouper back in the water (Yates v. U.S.).

Mr. Barr admits it is “counter-intuitive” to recognize that politics plays a role in the fair administration of justice. “But political accountability—politics—is what ultimately ensures our system does its work fairly and with proper recognition of the many interests and values at stake. Government power completely divorced from politics is tyranny,” he said.

Accountability also means an AG has to take the political heat for decisions, as Mr. Barr has. For an example of the alternative, recall James Comey’s willful decision to absolve publicly Hillary Clinton in the email case in 2016. Both AG Loretta Lynch and deputy Sally Yates abdicated their duty to supervise the FBI and take responsibility for the prosecutorial decision. No end of political trouble ensued.

In a better era, Mr. Barr’s speech would have been praised by progressive civil libertarians. It should be now too.