The New York Times Magazine published a story about Behrouz Boochani on Sunday, August 9, 2020. It is a powerful article, and I certainly encourage those who can get access to the article to read it.

Boochani received the same kind of treatment in Australia, in other words, that those who have fled to the United States from Central America and Mexico have been receiving in our country. What is different about Boochani's story is that he wrote a book about his treatment, pecked out on a forbidden cellphone that he hid from the authorities in the camp in which he was detained. Boochani's book is called, No Friend But The Mountains. It is an extraordinary story. 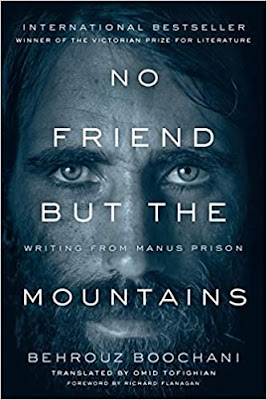 I believe that we would be wise to study up on asylum, and to understand our obligation to grant asylum to those fleeing from persecution in other countries. The Universal Declaration of Human Rights, which the United States signed at the end of World War II, provides the following:

Article 14.
(1) Everyone has the right to seek and to enjoy in other countries asylum from persecution.
(2) This right may not be invoked in the case of prosecutions genuinely arising from non-political crimes or from acts contrary to the purposes and principles of the United Nations.

"Climate refugees" will almost certainly grow in number in the years ahead. The number of those feeling from religious and governmental persecution will likely grow as well. We need to be ready.

Ready not with prison camps and cages, but with homes, jobs, and support.

Let us recognize, please, that our ability truly to provide asylum to those feeling from life-threatening circumstances is not only an obligation, but an opportunity.

We must be sure we don't waste it.