#249 / Beguiling The Butterfly Of Change 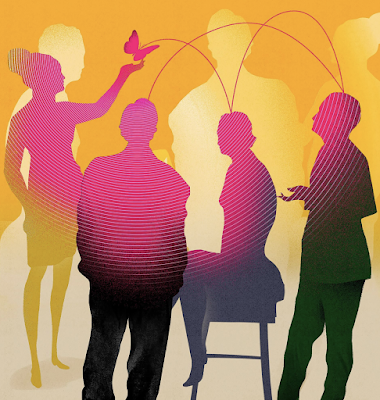 I like the image above. It accompanied a long article in the "Review" section of The Wall Street Journal, published in the February 22 - 23 edition. The article, by Jonah Berger, was titled, "How to Change Anyone's Mind." The advice contained in the article reminded me of one of my own blog posts, "What I Learned From An English Teacher," published in February. That blog post was all about the wisdom of making concessions - but only to strengthen your own argument.

Here are a few excerpts from Berger's article (since the entire article may be paywall protected):

STOP PUSHING YOUR POINT
When trying to change minds, organizations or even the world, we often default to a particular approach: pushing. Boss not listening to that new idea? Send them another PowerPoint deck. Client isn’t buying the pitch? Remind them of all the benefits. When people are asked how they’ve tried to change someone’s mind, my own research finds that the overwhelming majority of the answers focus on some version of pushing.

The intuition behind this approach comes from physics. If you’re trying to move a chair, for example, pushing usually works. Push it in one direction and it tends to go that way. Unfortunately, people and organizations aren’t like chairs; they often push back.

CATALYSTS CAUSE CHANGE
It helps to look to chemistry, where there’s a proven way to make change happen fast: Add a catalyst. Catalysts convert air into fertilizer and petroleum into bike helmets. But most intriguing is the way they generate change. Instead of adding heat or pressure, they provide an alternate route, reducing the amount of energy required for reactions to occur. Rather than pushing, they remove barriers.

FIND THE HIDDEN OBSTACLES
Again and again, the same approaches emerged. Instead of giving people more facts, figures or reasons, smart change agents find the hidden obstacles preventing change and mitigate them. Instead of asking what might convince someone to change, catalysts start with more basic questions: Why haven’t they changed already? What’s stopping them?

DON'T WE ALL HAVE CONTROL ISSUES?
People like to feel like they’re in control—in the drivers’ seat. When we try to get them to do something, they feel disempowered. Rather than feeling like they made the choice, they feel like we made it for them. So they say no or do something else, even when they might have originally been happy to go along. Psychologists call this negative response “reactance.” Decades of consumer behavior research shows that people have an innate anti-persuasion radar. They’re constantly scanning the environment for attempts to influence them, and when they detect one, they deploy a set of countermeasures.

Berger says that people tend to be "over-attached" to the status quo, so those wishing to stimulate change need to make the cost of the current situation clear. Berger also recommends that those advocating for change propose gradual change. He says those wanting to motivate change also need to reduce the risk, and that there needs to be a lot of corroborating evidence that a change would be positive, and that providing that kind of evidence is vital in efforts to induce people to change.

Berger's conclusion and bottom line is simple, and he makes an extravagant claim as he states it - the same claim he made in the title to his article: you can change "anyone's" mind:

It’s not about pushing harder or exerting more energy. It’s about reducing barriers to action. Once you understand that, you can change anything.

I think that fundamental changes absolutely must be made in the way we organize and operate our politics, our economy, and our social relationships. Because I do believe that so strongly, I put a real priority on working for change. Because I do believe that change is such an urgent necessity, my first instinct is to "push." Maybe, though, I need to think about this need to "push" in a different way. Maybe we need to focus most on pushing ourselves, so we never decide that we can give up on the need for change. If we do that, and never stop pushing ourselves, we may be able to stop trying so hard to push others, and can then use some of Berger's observations and techniques to help others make the changes that we know are so absolutely necessary.