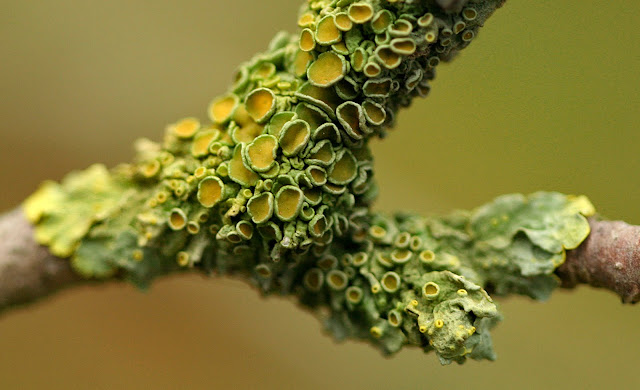 The picture above, from an article in Quanta, an online science magazine, shows us a lichen. Here is what the article has to say about lichens: "[They] are composite organisms: They consist of photosynthetic algae or cyanobacteria growing within filaments of a fungus. Yet this partnership is so intense and distinctive that they function as a single organism."

The article I am referencing is titled, "What Is an Individual? Biology Seeks Clues in Information Theory."

That question about "What Is an Individual?" is a question worth asking in the realm of human affairs, too. We tend to be pretty sure that we "know an individual when we see one," and we all pretty much count ourselves in that "individual" category.

Could it be that while we appear as "individuals," as "single organisms," we are actually more like a "partnership?" As Quanta says, "Lichens are symbiotic composites of fungi and algae or cyanobacteria. Even humans contain at least as many bacterial cells as “self” cells, the microbes in our gut inextricably linked with our development, physiology and survival."

I would like to suggest that the "partnership" metaphor - as a supplement, at least, to the idea that we are all "individuals" - is something worth thinking about. If we began to see ourselves as related to others in some fundamental and inescapable way, then we would have to change our approach to "politics." Among other things!

For instance, what about the idea that we are in a "partnership" with all forms of life, and with the entire Natural World? If we had that idea, it could have a big impact on how we conduct ourselves.

In the article I am citing, Melanie Mitchell, a computer scientist at the Santa Fe Institute, is quoted as saying that "[biology] is a science of individuality.” Still, as the article says, "the notion of what it means to be an individual often gets glossed over. So far we have a concept of ‘individual’ that’s very much like the concept of ‘pile,’” said Maxwell Ramstead, a postdoctoral researcher at McGill University. “If there’s a pile of sand, you intuitively know this is a pile of sand. But a pile is not a precisely defined thing. It’s not like after 13 grains, it moves from a collection to a pile.”

According to Manfred Laubichler, a theoretical biologist at Arizona State University, such a fundamental definition is absent in part because “biology as a field is completely under-theorized. It’s very much still an empirically driven discipline,” he said.

"Empirically driven" means biased towards what can easily measured. We can easily see the "individual" part of who we are, but our understanding of what constitutes an "individual" is "under theorized."

Let's see if we can't do a little better at discovering who we REALLY are!