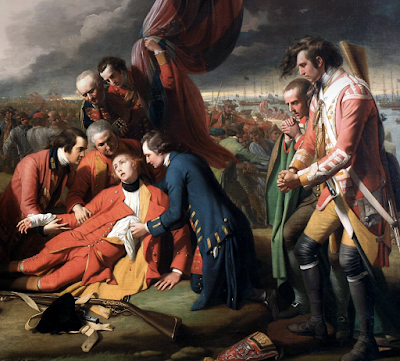 Are there laws of history? That question is the title of an interesting article in Aeon, an online magazine. Click the link to read the article. That's where the picture came from.

A New Yorker profile of historian Yuval Noah Harari, referenced in the Aeon article, is also interesting. If you care about history, and specifically about the study of history and the writing of history, both articles are worth reading.

Neither of the articles, however, as far as I am concerned, provides a dispositive answer to the question posed by Aeon.

Not to worry, I am pretty sure I know the answer, and I am happy to share it with you here.

There are no "laws of history." History is, in one sense, the story we tell ourselves about the things that humans have done, and about the meaning of the things that humans have done. The word "history" can also mean not just the "story," but the historical things we have done in and of themselves. So, there is a "history" of World War II, by which can mean the story of what happened in World War II.

But, again... history is not just a "story." World War II did happen, so what actually happened in the past (the things we might tell the story about) is the real "history." History as "event," and history as "story" (which are different things) are labeled with the same word.

The two articles I have mentioned, the way I read them, are mainly focused on "historiography," which is the study of the methods that historians use in developing history as an academic discipline. Do the stories keep repeating familiar and predictable patterns? Are the things that have occurred in the past (and about which we will write history) determined by what has happened before, the way that the trajectory of a billiard ball can be predicted with accuracy if you know about the initial force that put it in motion and the characteristics of the table on which the ball moves? Where "history" is concerned (as opposed to what happens to the billard ball) there may be past patterns, but there is no certain predictability, and thus no "law" of history.

There really are "laws" that govern the future trajectory of the billiard ball. But there are no "laws" of history that will allow us to know what will happen in the future, just because we know about what has happened in the past. Why not? Here is the reason: human beings are not determined, but are determining. We can do things that have never been thought about or done before, things that are unexpected, and that will have results that are different from the results that have usually occurred in similar situations in the past.

This is to say, with respect to human action, that human beings have the inestimable gift of "freedom," which means that we are always capable of doing something that is unprecedented. We can always tell ourselves a new story, a story never known about or heard before. In the human realm, "anything" is possible. We are not subject to the laws of physics, so that the very word, "law" means two dramatically different things.

In the Natural World, where the laws of physics (and other natural laws) prevail, a "law" is a statement that "describes" what must and will happen. The "law" articulates an inevitability.

In our world, the world we create, the human world, a "law" is not a description but a prescription. Our human laws are not statements that tell us about what must and will happen, but are our written-down statements about what we want to happen, and about what believe that we should do.

History is what we do, and history is the story we tell about it later.