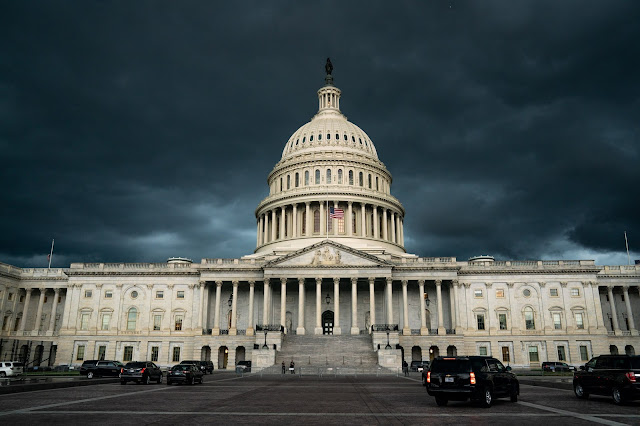 The New York Times let its readers know, on July 26, 2020, that "Congress is a toxic mess." Candidly, this observation was not really "news" to anyone; at least, I don't think so.

The Times' article, by Carl Hulse, provided some specific examples of just how "toxic" Congress has become. Basically, though, this article was not the result of any independent investigation. Hulse was simply relaying the findings of a report that had not yet been released on July 26th. That report, now available, is titled, "Congress at a Crossroads." The report was produced by the Association of Former Members of Congress. The USAFMC, to use the acronym that the organization has embraced for itself, is an organization about which I had known nothing until I read Hulse's article in The Times. Thus, I guess I can attest that the article did bring at least some real "news."

To summarize the USAFMC report, Hulse made this observation:

Congress has largely become a dysfunctional institution unable to meet the critical needs of our country,” says a new report, “Congress at a Crossroads,” produced by the Association of Former Members of Congress. Scheduled to be issued publicly next week, it is a damning indictment of the steady deterioration of a congressional culture that today rewards power over progress and conflict over consensus.

This complaint about the deterioriation of the "culture" of Congress, a culture that used to produce compromise (and maybe, sometimes, even "consensus"), is not, by any means, a new indictment of the Congress. In its own Tweet, announcing the forthcoming report, USAFMC translates the above description into the following statement:

Bipartisanship is at the heart of a healthy Congress.

I have a thought about "bipartisanship" and about the Congress. This is just one of many thoughts I have. In order adequately to address the reasons that Congress is now a "toxic mess," I think I would have to write a signicant essay, which would certainly have to include an in-depth examination of campaign finance, and the vast power that money now plays in Congressional politics. My thought today is much more modest in its ambition. I would just like to raise a possibility that may or may not resonate with those who are reading this blog posting, and about which they may or may not have thought.

We take it for granted that since Congress is the premier branch of our tripartite national government, every citizen in the United States, from whatever state that citizen might hail, has an important interest in making sure that every person elected to Congress, from whatever states those representatives might hail, will reflect that citizen's own views and priorities. Congress, and Congressional politics, in other words, has been completely "nationalized."

That this is, in fact, true, is verified, in my mind, by the incredible number of solicitations I receive from Congressional candidates running for Congress in states like Texas, Maine, New York, Minnesota, and Arizona. I know nothing about the issues that might exist in all those different states, but it is clear that these "Congressional" races are not really about those local issues at all. Congressional elections are no longer focused on what a candidate might do for the local voters that he or she will ultimately represent. The only question that makes a difference is whether a candidate is "Blue" or "Red," Democrat or Republican. In other words, not only has our Congressional politics become "nationalized," it has evolved into a national effort to achieve national a partisan majority in which local issues are of marginal importance, if of any importance at all.

The original plan was that most government would take place at the local level, which means the "state" level, and that the national government was always "additional" to that basic level of government. We are, as we all know, though we don't think about it very much, citizens of the United STATES of America. The "states" come first, before the national government. That is how the Constitution is structured. Congressional representatives were supposed to represent local concerns, as such local concerns might be addressed at the national level. It was never remotely thought that I, in California, would have any reason to get involved in a campaign in Kansas, or Wisconsin, or Maine.

What if we could return to that way of making our politics work? What if Congressional politics were not "nationalized," but were, in fact, "localized?"

If elected Members of Congress came to the Congress owing to the fact that they had won a local election in which the partisan affiliation of the candidate was only one thing that mattered, and not the only thing that mattered, it might be easier to get back to that Congressional "culture" that suggests that the Congress could debate, discuss, and ultimately decide upon nationally important decisions not on the basis of a strictly two-party perspective imposed from the national level on down, but on the basis of a weaving together of the rather different approaches that would be reflected by Congressional representatives who were there to advance local interests, first, instead of reflecting some national party platform.

That kind of politics would require a lot more work by citizens, focused on local elections. And the "money" issues would have to be addressed. Huge difficulty there, I do have to admit. But I have a thought that Congress would be a lot less 'toxic," and would function better, and work towards compromise, not conflict, if those voting in the Congress owed their election (and their reelection) not to national party leaders and national party money, but to the constitents in the local districts from which they were elected.