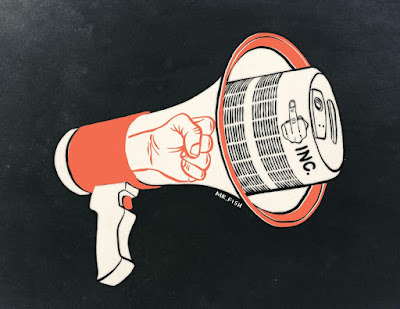 Chris Hedges, who is both a Presbyterian minister and an American journalist, is not known for being all "sweetness and light." Hedges is pretty outraged by the state of the world, and I consider that this perspective reflects Hedges' strong grasp on reality. He doesn't cut slack for anyone.

One of Hedges' recent articles, "Don’t be Fooled by the Cancel Culture Wars," provides a good example. While Hedges is sympathetic to those who are complaining that free expression is being suppressed by social justice advocates who won't tolerate anything less than total allegiance to their exact idea of what social justice demands, Hedges wants to make a different point. He is less outraged by the so-called "cancel culture" than he is by how U.S. corporations are trying to preempt current social justice movements to ingratiate themselves with the public:

The cancel culture — the phenomenon of removing or canceling people, brands or shows from the public domain because of offensive statements or ideologies — is not a threat to the ruling class. Hundreds of corporations, nearly all in the hands of white executives and white board members, enthusiastically pumped out messages on social media condemning racism and demanding justice after George Floyd was choked to death by police in Minneapolis. Police, which along with the prison system are one of the primary instruments of social control over the poor, have taken the knee, along with Jamie Dimon, the chief executive of the serially criminal JPMorgan Chase, where only 4 percent of the top executives are black. Jeff Bezos, the richest man in the world whose corporation, Amazon, paid no federal income taxes last year and who fires workers that attempt to unionize and tracks warehouse laborers as if they were prisoners, put a “Black Lives Matter” banner on Amazon’s home page..

The rush by the ruling elites to profess solidarity with the protestors and denounce racist rhetoric and racist symbols, supporting the toppling of Confederate statues and banning the Confederate flag, are symbolic assaults on white supremacy. Alone, these gestures will do nothing to reverse the institutional racism that is baked into the DNA of American society. The elites will discuss race. They will not discuss class....

Corporations have seized control of the news industry and turned it into burlesque. They have corrupted academic scholarship. They make war on science and the rule of law. They have used their wealth to destroy our democracy and replace it with a system of legalized bribery. They have created a world of masters and serfs who struggle at subsistence level and endure crippling debt peonage. The commodification of the natural world by corporations has triggered an ecocide that is pushing the human species closer and closer towards extinction. Anyone who attempts to state these truths and fight back was long ago driven from the mainstream and relegated to the margins of the internet by Silicon Valley algorithms. As cancel culture goes, corporate power makes the Israel lobby look like amateurs.

The current obsession with moral purity, devoid of a political vision and incubated by self-referential academics and educated elites, is easily co-opted by the ruling class who will say anything, as long as the mechanisms of corporate control remain untouched. We have enemies. They run Silicon Valley and sit on corporate boards. They make up the two ruling political parties. They manage the war industry. They chatter endlessly on corporate-owned airwaves about trivia and celebrity gossip. Our enemies are now showering us with politically correct messages. But until they are overthrown, until we wrest power back from our corporate masters, the most insidious forms of racism in America will continue to flourish.