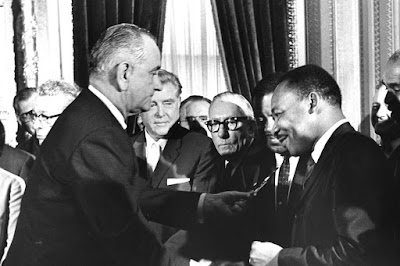 The photo above shows President Lyndon Johnson presenting a pen to Martin Luther King, Jr., after President Johnson has just used the pen to sign the 1965 Voting Rights Act. This picture illustrates an opinion column by Ward Connerly, published in the July 25-26, 2020, edition of The Wall Street Journal. Connerly's opinion column bore this title:

Then, of course, there is this more recent picture, taken on May 25, 2020, as a Minneapolis police officer kneeled on the neck of George Floyd for almost nine minutes, and killed him. This episode is only the latest of many killings of Black Americans by white police officers. We are asked to remember them, and to "say their names." When we do, when we say those names, the names of those killed by official agents of the law, surely we are compelled to admit:

America Is a Racist Country 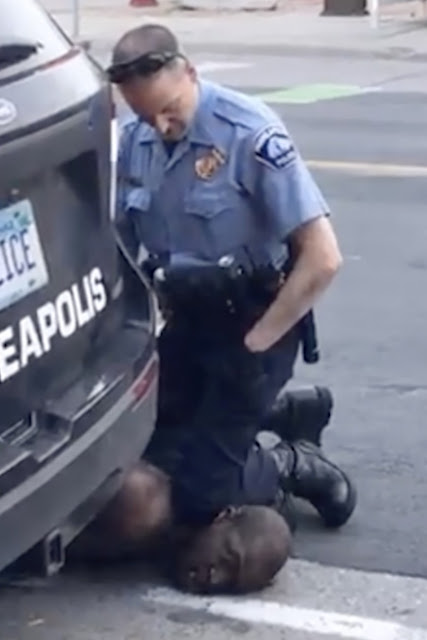 I always have a problem with the use of those "is" words that seek to state a "reality" as if "reality" and "the truth" were fixed and immutable and truly accessible to everyone, just as the results of a scientific experiment are deemed true when their results can be duplicated by different people, at different places, and at different times. Great for scientists investigating the laws that govern the World of Nature, but not so applicable when it comes to our human world.

I hate to get all philosophical on those who read this blog, but I do believe that we have to give a little thought to epistemology before we start claiming that we can say with any confidence what "is," and what "is not." In science, we really can say something either "is" true, or "is not" true, because the World of Nature, a world that we did not create ourselves, operates according to laws that perfectly describe what must and will happen. Truth in the Natural World is quite different from truth in the human world in which we most immediately reside.

In our human world, the realities we expereience are the realities that humans have created, and can change, and an unacceptable reality can be transformed into an acceptable one, or into a more acceptable one - or vice versa. Connerly is certainly correct to say that if America were racist, in some inevitable and enduring way, the Voting Rights Act of 1965 would never have become law.

But The New York Times series on the penetration of slavery into our national life, and the photograph of the murder of George Floyd, make it very clear that racism has been and continues to be an enduring feature of our national life. Again, this is an observation based on looking to the past, to what has already happened.

Any "is" statement, if that statement concerns a feature or facet of our human world, can really only tell us about the past. What we say "is" true is not what "will be" true - at least not necessarily - because we live and act in the present moment, and depending on what we do right now, we will either continue past practice and perpetuate the past reality, or we will do something unexpected and transform the reality in which we live into something that is fundamentally new and different from the past. This rule applies both to individual and to collective action.

Both Connerly and The New York Times are looking to the past to attempt to define what "is," to state a truth about our country. And both are "right," if we understand all "is" statements to be what they really are, statements about what has happened in the past.

America has a long history, deeply steeped in racism, beginning (per The New York Times) in 1619. But we fought a Civil War to end slavery, and our country has not always been racist in what it has done, as Connerly notes in his opinion column, citing to the 1965 Voting Rights Act.

Walt Whitman and Bob Dylan, both poets, and not epistemologists, have correctly identified our actual human situation. Here is Whitman, in Section 51 of Leaves of Grass:

The past and present wilt—I have fill'd them, emptied them.
And proceed to fill my next fold of the future.
Listener up there! what have you to confide to me?
Look in my face while I snuff the sidle of evening,
(Talk honestly, no one else hears you, and I stay only a minute longer.)
Do I contradict myself?
Very well then I contradict myself,
(I am large, I contain multitudes.)
I concentrate toward them that are nigh, I wait on the door-slab.
Who has done his day's work? who will soonest be through with his supper?
Who wishes to walk with me?
Will you speak before I am gone? will you prove already too late?


Bob Dylan says the same, in a song from his latest album:


I sing the songs of experience like William Blake
I have no apologies to make
Everything’s flowin’ all at the same time
I live on the boulevard of crime
I drive fast cars and I eat fast foods . . . I contain multitudes

Who are we? What am I? We all contain multitudes, and all possibilities are within us, individually and collectively. We will decide who and what we are by our choices, by what we do right now. That is the only way we know.

Racist, or not? Do we have a choice?
You know we do!
Lift Every Voice!