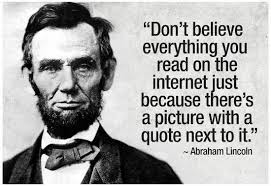 Here's Abe Lincoln telling us that we shouldn't believe something just because somebody told us to believe it. That's good advice. That is good advice even if the thing you heard came from somebody you have every right to assume knows what they are talking about. Even if you heard it from "Honest Abe" himself!

As indicated in the illustration above, we particularly shouldn't believe something just because we saw it on the Internet, with or without a picture next to it.

"Trust but verify" is how Ronald Reagan put it, and that phrase articulates an excellent epistemological principle. Considering Reagan's own conduct as president, "trust but verify" is a principle that was particularly appropriate when judging the veracity of anything he said.

In this blog posting, I want to pursue a slightly different point, and to state a concern with the phrase, "Don't believe it," as that language is sometimes used in political discussion. Take the following as an example of what I am talking about:

Joe Biden, Pete Buttigieg and Mike Bloomberg claim they’re proposing a moderate, less disruptive approach to health-care reform when they advocate a public option—a government policy offered as an alternative to private health insurance—in lieu of Medicare for All. Don’t believe it. My research finds that such proposals would increase the federal deficit dramatically and destabilize the market for private health insurance, threatening health-care quality and choice (emphasis added).

The statement quoted above is from an opinion column in The Wall Street Journal ("The Myth of the ‘Moderate’ Public Option"). The column, by Lanhee J. Chen, who is associated with the Hoover Institution, ran in the newspaper on January 24, 2020. It rubbed me wrong when I read it, and continues to bother me, and now I want to say why.

As used in the example above (and this kind of rhetoric is common in political discourse), the "don't believe it" admonition is a way to cut off dialogue and discussion. Chen thinks that the so-called "moderate option" on Medicare for All, which Buttigieg likes to call "Medicare for all who want it," is not a real "moderate" or "economical" way to move to a more inclusive health care system in the United States. He may or may not be right, but his "don't believe it" statement dismisses the validity of any disagreement with what he then goes on to say.

I think I may have used that "don't believe it" phrase in my own political discussions, from time to time. Somehow, when I read that column by Lanhee Chen, I realized that one should never do that.

If we are ever going to get out of the political box canyon in which we find ourselves, on almost every topic of importance, including how to provide adequate health care for everyone, we are going to have to "reason together," not dismiss those who have objections to or disagreements with our own position.

This blog posting, I guess, is mainly just a "reminder to self."

Being skeptical about assertions that are not supported by a well-reasoned argument or explanation, and that are not based on verifiable facts, is a good first principle. But here's a second: When engaged in a political discussion, don't utilize that, "Don't believe it" phrase as a way to stave off and discourage a robust argument on topics about which there can be (and almost always are) different perspectives. If you employ that technique, you lose the chance to learn something. You lose the chance to discover that it might be wise for you to change your mind!

End of reminder to self. Free for your own use!