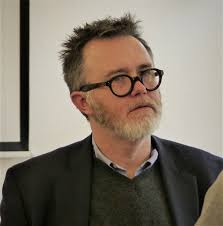 Rod Dreher, pictured above, writes a daily blog that appears as an online column on the website of The American Conservative.

In my effort to make sure that I am not just hearing from people with whom I know I will agree, I subscribe to Dreher's blog. I have found him to be a serious person, and not just another right-wing ranter. He is, for instance, rather critical of our current president. You can check out the article from The New Yorker that first alerted me to Dreher by clicking this link.

You will find, if you do read that article, that Dreher is a rather devout Catholic. Religious, then? Absolutely, and Dreher is definitely "pro-life," as anti-abortion advocates are often labeled. Nonetheless, he is not one of those "evangelical" Christians who seem willing to support the president, no matter what the president does, because the president has promised to appoint Supreme Court Justices who will ensure that a "woman's right to choose" will be eliminated as the ruling law of the land.

In one of his recent blog postings, "The Hard Road Ahead," Dreher discusses the coronavirus crisis, quoting political scientist Yascha Mounk as follows:

Political scientist Yascha Mounk is downcast. Writing in The Atlantic, he says he has been holding out hope that this or that thing would be the miracle we needed to defeat the pandemic, but now he’s saying we need to resign ourselves to the sad fact that the path out of this Covid-19 crisis is going to be long and hard. Excerpts:

There was real reason to indulge in each of these hopes. But in the past several days, a series of developments have undermined the factual basis for all of them. So I am, finally, starting to reconcile myself to a darker reality: The miracle of deliverance is not in sight.

As you can see, what I have provided above is Dreher quoting Mounk. Here is what Dreher himself has to say:


I’ve been saying in this space for some time — long before the pandemic — that the United States is in a pre-totalitarian state, according to the measures laid out by Hannah Arendt in The Origins of Totalitarianism. Widespread loneliness, social atomization, loss of faith in institutions, a mania for ideology — these and other factors were present and worsening before the pandemic struck. What kept us together in spite of them was our relative wealth. Now, because of the coronavirus, we are staring into the face of mass impoverishment — and nobody, except for the superrich, is safe from it. Keep in mind too that the failure of the Russian imperial government to respond effectively to the 1891-92 famine there profoundly undermined confidence in the regime, and helped set the stage for the later revolution.

As I finish the revision of my forthcoming book about the rise of soft totalitarianism, what concerns me most is the long-term effect of virus-caused poverty and instability will prepare us to accept degrees of surveillance and control that we would not have tolerated before — this, as the cost of getting back to normal. I’m not saying that evil actors in the state will hold us hostage to that. I’m saying that it might genuinely be the only way to restore the country to something resembling normal — and that people will be so exhausted psychologically and battered economically to say no to it. China’s present could easily be our future.

Once the system is in place, it’s not going to go away. This is my fear.

I love Hannah Arendt, and her analysis of totalitarianism is spot on. However, what Arendt says (and what Dreher fails to mention) is that there are no inevitabilities whatsoever in our human lives, because we all have the opportunity to do something new, and unexpected, something unprecedented, something revolutionary, something that has never, ever been done before.

Not long ago, in one of these daily blog postings, I was quoting Jesus, an authority to whom Dreher would certainly defer. Jesus' advice is what I would counsel Dreher to keep in mind. For the more secular who may be reading this, you could substitute in Franklin Delano Roosevelt for Jesus, though I do think, wise as he was, FDR didn't quite match up to that guy from Galilee.

To my mind, what the coronavirus crisis is teaching us is a helpful lesson, and it is not that a totalitarian regime is just around the bend. First, I think we are learning that we are all in this life together, every single person in this world, and that we need to operate on that basis if we hope to survive. Second, I think we have learned that when a crisis does come, we can act quickly, changing habits and patterns that may have seemed "inevitable," but weren't.

As a "conservative," Dreher wants to return to the situation that existed before the crisis. He wants to recapture the past, and to return to what he calls "normal." Dreher thinks that totalitarian solutions might be utilized, with public acquiescence, to recover that "normal" that appears to have passed away. "This is my fear," he says.

I am of the opposite alignment. I am not a "conservative." I am a revolutionary. Hannah Arendt has a good book on that, too, and I recommend it. I am not trying to recapture a past now gone, but to help a new world being born.

Whichever polarity might be your own, "fear" is not a sentiment to cultivate in the face of a crisis. Fear is immobilizing. Freezing up, and losing the ability to take those new and unexpected actions that Arendt talks about, is definitely contraindicated.

Lots of people have made this point (including FDR). Jesus sums it up in just two words. They are a powerful advisory and antidote against the despair that accompanies any feeling of inevitable doom: